The upcoming duel at Plymouth is of huge importance for Charlton, while the home team doesn't really have any particular motive other than winning for the sake of it. Read our preview to learn more about this duel and to get some free betting tips.

The best free betting tips for Plymouth vs Charlton

One of the matches that offer great betting options and odds for League One predictions is Plymouth vs Charlton, so check a few of our favourite tips and predictions for this game.

Odds are subject to change at all times, so check them with your bookmaker before you place a bet Our recommended bookmaker for this game is Ladbrokes.

There are many reasons why we expect Charlton to win this game, but our prediction is mostly based on the fact that Charlton needs to win this game, while Plymouth doesn't. This often makes a huge difference in approach and determination. Another reason is the great form in which Charlton is, while Plymouth is hugely inconsistent. Lastly, Charlton has won three of the previous five meetings between these teams.

This bet is interesting because Charlton can score two goals and not win, and you would have a winning bet. If we look at the head-to-head history between these teams, Charlton has scored exactly two in four of their last five games, including the first meeting this season which ended 2-2. And while Charlton scores around 1.3 goals in away games this season, they have scored at least two goals in two of their previous three away games.

Since we expect Charlton to score at least two goals, we also think that this game can go over 2.5 total goals. Plymouth has gone over 2.5 total goals in three of their last five games, and Charlton has done the same. Additionally, Plymouth games average 2.81 goals per match, while Charlton's games are also efficient with 2.7 goals per match. So, this seems like a reasonable prediction.

Top odds and useful stats for Plymouth vs Charlton

You don't have to spend hours looking for the best odds for Plymouth vs Charlton – we have selected odds from top UK bookies for you:

Plymouth vs Charlton preview: Can Charlton reach the playoffs?

The Pilgrims are secure in the middle of the League One standings, without much of a chance to move up or down by a lot. This means that they will play out the rest of the season in a relaxed atmosphere, without having to worry about relegation. The team has been pretty inconsistent lately, with one win, two draws, and two losses in the last five games. They don't have big problems with injuries, but Woods, Sawyer, and Cooper are unlikely to play in the upcoming duel against Charlton.

The Addicks are currently outside of the playoff zone by a couple of points, but they are two matches behind Oxford in 6th place. The team has a very good chance of making the playoffs, especially since they've been in great form lately. Charlton is without a loss in nine consecutive games, with five wins and four draws. They've also beaten some of their main rivals in that time span, like Sunderland away from home a couple of games ago. Washington and Famewo are under question for this match due to injuries. 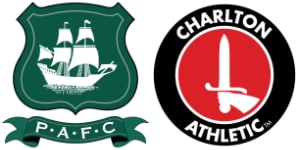