The Nene River derby. It's not one of football's biggest rivalries but it means a lot to the fans of Peterborough and Northampton fans. This game comes with extra significance. Who will win? Find out with our Peterborough vs Northampton match preview with free tips, predictions and odds mentioned along the way.

Peterborough to pile pressure at the top

When you're so deep into a league season and the teams are separated by such distance there is generally only one reason; the higher team has much better quality. You then have to consider form; Peterborough have dropped just four points from 30 at home. Northampton by stark contrast have collected just four from their past 10 away games. They were all draws too. The head to head doesn't read to kindly for the Cobblers either with Posh unbeaten against them since 2006; they've met 10 times since then too. Finally, you have motivation. Given both have huge a`goals that are not yet complete you have to think they'll both be bang at it. It means quality and form will shine through for a Posh win.

Room to breathe for Posh

We've already backed up our prediction for why Peterborough will win this match with some pretty sound stats. Now it's about explaining why we think they'll get the win with plenty of breathing space. The Cobblers have been comprehensively beaten on the road by several sides up at the top end of the table this season. Hull hit them for three last week, Blackpool beat them 2-0 not too long ago whilst Oxford and Portsmouth both beat them by four earlier in the campaign. Given Peterborough have scored 13 goals in their last five games – including a 7-0 and 3-0 win – it's perhaps unlikely Northampton fans are too confident. The last three meetings between the pair have ended with Peterborough running out winners by more than one goal as well.

Dembele on the scoresheet

Dembele might not be Peterborough's main goal threat – that's Jonson Clare-Harris – but he is the form man. The 24-year-old isn't always named in Darren Ferguson's starting XI but three goals in his last two appearances means his chances of playing in this fixture are very strong. Dembele hit double figures for the season with his brace against Swindon; he'll be feeling confident of adding to that tally against Posh's lowly rivals come Saturday.

Peterborough vs Northampton: All the key stats

Battle of the bragging rights

A local derby is often a game that people say sees form go out the window. Given the different fortunes of these two this term, it's hard to believe form can swing that much. Northampton are desperately trying to escape the drop zone; Peterborough are trying to secure a ticket to the Championship. We know who will be doing most of the probing come the weekend but who will win? 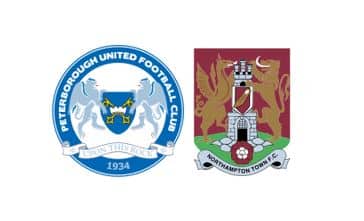