Barnsley remain in serious trouble at the foot of the Championship table after yet another loss. Will it be an all too familiar story as they travel to take on Nottingham Forest? Find out with our Nottingham Forest vs Barnsley match preview with free tips, predictions and odds mentioned along the way.

Nottingham Forest might come into this match off the back of three straight wins but it's more the utterly abject form Barnsley are showing why we fancy Forest to win. Barnsley have won just one of their last 20 games in all competitions; 13 of them have ended in defeat including their last three away games. When you then consider that the last three head to head meetings have seen Nottingham Forest win twice and draw once it's hard to imagine any outcome but a win.

We'll be honest, this tip could have swung either way with Nottingham Forest's form suggesting ‘no' was the way to go and Barnsley's making us swing back to ‘yes'. There is a clear reason why we've opted for both teams to score, no though; it's because of the head to head record. So, Barnsley have seen both teams score in four of their last five with Nottingham Forest seeing someone blank in four of their last five; that's pretty even pegging in stat terms. So, the h2h record decides it for us; four of the last five have seen someone fail to score.

Check out the key stats & form for Nottingham Forest vs Barnsley

Nottingham Forest remain in the hunt for the playoffs with Barnsley in desperate need of wins to escape the relegation places. It means the points will be highly valuable here.

Nottingham Forest are right in the thick of a playoff race after finding some form. Now, with three wins on the bounce their players may finally believe they can secure a top six finish and this is another fantastic opportunity for three more points.

Barnsley have been so poor it's hard to explain. Or even believe for that matter. The Tykes are in desperate need of three points but they'll need to do something they've not done on the road all season – win.

A brief FAQ ahead of Nottingham Forest vs Barnsley 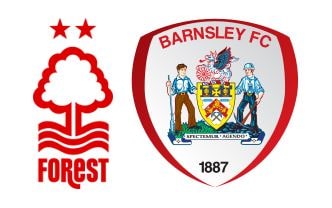