Shrewsbury have drawn more games this season than any other team in the league (13 – joint with Sunderland) and they've hardly been convincing of late. They've managed narrow wins over struggling sides Rochdale, Burton and Swindon but then lost to Bristol Rovers. Northampton meanwhile have mustered a few surprise wins in their last few matches; most notably a 4-1 win over Portsmouth. Last time out they slipped to a crushing defeat to relegation rival Wimbledon. They cannot afford to lose again. The Pompey win was a blip, their games are normally tight affairs. The same is true of Shrewsbury who will happily take a draw to keep ticking off the games as they look to confirm their League One status. Two of their last four head-to-heads have ended 1-1 too.

The first of our predictions sort of gives away the fact we expect the scoring to remain below 2.5 goals. This tip in itself is backed up by data though. In Northampton's last 10 home matches only two have seen over 2.5 goals. The visitors have a similar record in their away games; of the last 10, eight of them have seen fewer than 2.5 goals. With a broader outlook, the stats tell a similar picture. Both teams have a season average of 2.3 goals per game; only three teams rank lower.

Making a prediction on a goalscorer when we've already offered tips suggesting the match will be low scoring could be described as a tad ballsy; then again, Ryan Watson is a man in form for Northampton. The midfielder only has six goals to his name this season but all of them have come inside the last 10 fixtures with four in the last four home games. It's by no means guaranteed he'll pop up on the scoresheet again on Friday but something tells us he'll be getting a mention in the Shrews' pre-match team talk.

All the stats and odds for Northampton vs Shrewsbury

The Cobblers are wobbling

There is no getting away from it for Northampton; last week was an absolute disaster in their bid to stay in League One next year. They had the opportunity to open up a small buffer to the bottom four. Instead, they lost 1-0 courtesy of a late Wimbledon goal meaning they can feel breath on their neck. Shrewsbury should be okay with a 10 point cushion but defeat here could set the nerves on edge. Shrewsbury would take a draw now. Northampton probably wouldn't but they might just have to.

FAQ about Northampton vs Shrewsbury 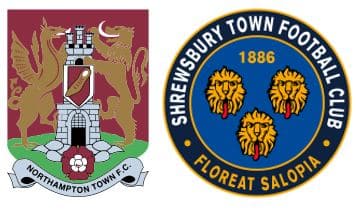