When you talk about six pointers, this is the sort of match up you mean. Who will take home the three points? Find out with our Northampton vs Bristol Rovers match preview with free tips, predictions and odds mentioned along the way.

Joey Barton has struggled to put too many wins on the board since taking charge of Bristol Rovers back in February. He's been getting improved performances in recent weeks though and duly got an important win at the weekend. It brings them into this relegation clash with Northampton knowing three points would be absolutely enormous. The Cobblers form has been indifferent reading as LWLWL over the last five. One of those losses was a similar game to this; Northampton fell to a 1-0 defeat to Wimbledon. The wins, however, have come against sides with little to play for and that makes us think they could get out fought.

It's unlikely to be filled with goals

In spite of our first prediction backing Bristol Rovers to win, Northampton are actually in reasonable form at home. They don't, however, score many goals. They've netted just 33 all season, which is a league low. It's not skewed by form earlier in the campaign either – the Cobblers have just two goals to their name in the last five games. Over the same time period, Barton's men have scored just one more. That's a pathetic five goals between the two teams in 10 games. Surely this meeting won't be a goalfest!?

Although we expect Bristol Rovers to get the job done over 90 minutes the last of our three tips is for the opening exchanges to be very cagey; there is lots on the line after all. It's not a prediction made purely off that speculative viewpoint though. We already know neither side possess a huge array of attacking talent. Throw in the fact that Northampton's last seven games haven't featured a goal in the opening 30 minutes and you have the basis of a sound bet. If you need extra convincing, Rovers have score before the half hour mark just once in their last five fixtures.

Northampton vs Bristol Rovers: The form and odds

Rovers to leave the bottom three

Northampton vs Bristol Rovers might not be the game of the weekend for quality but for ramifications to the league it's certainly up there. Both sides will fancy their chances but it will likely boil down to who has the guts and fight within their squad. Expect an interesting watch but not a good one!

A few closing thoughts for Northampton vs Bristol Rovers 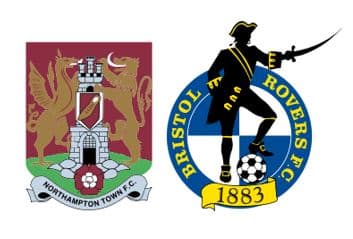