Newcastle are out of the relegation zone and going in search of their third straight win in the Premier League this weekend. Aston Villa provide the opposition and Steven Gerrard's men will be expecting a very tough game against the Magpies and their passionate fans.

This is a game that has the potential to produce plenty of goals, especially when you look at both teams' midweek results. Over 2.5 goals were on show at St James's Park as Newcastle beat Everton 3-1, while four of Aston Villa's last six games have produced at least three goals.

Both teams have scored on each of the last two occasions that Newcastle have played host to Aston Villa and we're expecting more of the same on Sunday. Three of Newcastle's last five matches and four of Aston Villa's last six outings have also ended with both teams getting on the scoreboard.

Newcastle vs Aston Villa: The Stats, Figures and Odds

Newcastle weren't that much better than Everton in midweek but the hosts showed far more passion and desire than Lampards men and defended much better. Everton went in front through an own goal from Lascelles but Newcastle got back onto level terms a minute later, this time Lascelles headed the ball against the ball and it hit Holgate and went in. From then on there only looked like being one winner. Fraser made it 2-1 in the 56th-minute and Trippier curled in a free-kick to secure a 3-1 victory for the home side.

Aston Villa will be disappointed not to have beaten Leeds at home in midweek, yet relieved to have secured a point at the same time as they ended the game with 10-men. Leeds went in fron in the 9th-minute but Villa responded really well, scoring three goals in 13-minutes through Coutinho and a Ramsey double to move 3-1 in front. Leeds did manage to pull a goal back before the break and in the second half, the visitors equalised to make it 3-3. Late on, Aston Villa centre-back Konsa was shown a red card for a second bookable offence and will now miss the trip to Newcastle.

FAQ about Newcastle vs Aston Villa 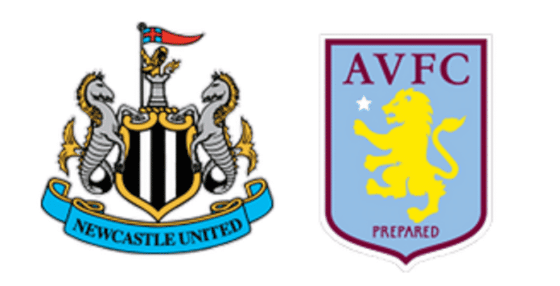