Free Predictions and Odds for Spezia vs Napoli

The 22nd of May marks the final day of the Serie A season and while Napoli have nothing to play for after securing 3rd spot in the table, their hosts Spezia could still move up two places with a win on Sunday.

This is a game in which we are expecting plenty of goalmouth action at both ends of the pitch. Five of the last six meetings between these two clubs in all competitions have ended with both teams scoring and at least three goals being produced. Each of Spezia's last five outings in Serie A have also produced over 2.5 goals and seen both teams score and the same can be said for four of Napoli's last six league games, so you can see just why we're backing goals on Sunday.

Osimhen has scored almost twice as many league goals this season as Spezia's top-scorer Verde, and we're backing the Nigerian striker to find the back of the net once again this weekend. Osimhen is on 14 Serie A goals for the campaign and has found the back of the net in seven times in his last eight appearances for Napoli, so it is clear to see just why he's our pick to score against Spezia.

Spezia vs Napoli: all you need to know

Spezia put in a fantastic effort away at Udinese and were rewarded with all 3pts last weekend. The visitors fell behind in the 26th-minute but still went in at the break 2-1 up thanks to goals from Verde and Gyasi. Maggiore added a third goal for the visitors early in the second half and although Udinese pulled a goal back in stoppage-time, the damage had already been done.

Napoli played host to relegation battlers Genoa in their last league game where a goal in the 32nd-minute from Osimhen put the home side 1-0 up at the break. A penalty from Insigne in the 65th-minute doubled Napoli's advantage and 9-minutes from time, Lobotka made sure of the points with the host's third goal of the game.

Napoli: the visitors have a clean bill of health and no suspended players for the trip to Spezia.

FAQ for Spezia vs Napoli 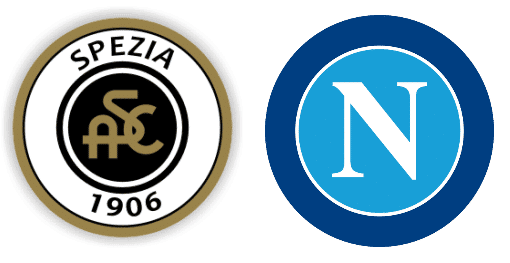