Free Predictions ahead of Napoli vs AC Milan

Just goal difference separates the league leaders Napoli from second-placed AC Milan in the Serie A table. The two title challengers go head-to-head this weekend in what is expected to be a close and competitive 90-minutes in Naples.

Under 2.5 goals have been produced in five of the last seven meetings between these two clubs in all competitions, and we're predicting another close game on Sunday. Four of Napoli's and three of AC Milan's last six outings in league and cup have also ended with fewer than three goals being scored, so you can see just why we're expecting a low-scoring 90-minutes between the pair this weekend.

In terms of a final scoreline, we're backing this game to end in a 1-1 draw. Both teams have looked good going forward of late but Napoli have failed to keep a single clean sheet in their last five attempts. Napoli have also only lost one of their last five games against AC Milan but the visitors have picked up 4pts from their last two trips to Naples.

Last time out, Napoli travelled to Lazio hoping to secure an important 3pts in the race for the Serie A title. Insigne put Napoli 1-0 up in the 62nd-minute but 2-minutes from time Pedro equalised and the game appeared to be heading for a draw. However, deep into stoppage time, Ruiz popped up to score a rare goal for Napoli that sent the away fans wild. Napoli top the Serie A table via goal difference as things stand with both them and AC Milan on 57pts.

AC Milan were involved in midweek Coppa Italia action as they took on local rivals Inter in the 1st leg of their semi-final. The game itself was rather uneventful and ended 0-0 but with the home advantage counting for very little when these two sides meet, this tie is still wide open. AC Milan won on their last trip to Napoli and will be looking back at that game for inspiration, especially after they lost 1-0 in their own backyard to Napoli in December.

Napoli: Malcuit, Anguissa, Tuanzebe and Lozano could miss the big game through injury.

AC Milan: Romagnoli and Ibrahimovic are the two main injury concerns for the visitors.

FAQ for Napoli vs AC Milan 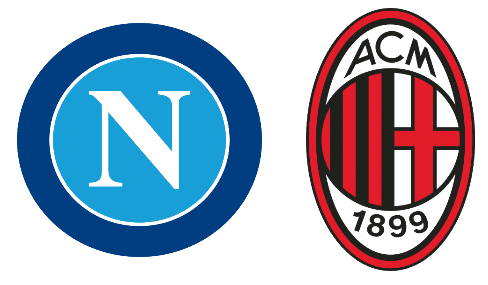