Monaco and PSG are set to square it out in Round 29 of the French Ligue 1 fixtures. Both teams have had some inconsistencies heading to this weekend as neither side recorded back to back wins in the last five Ligue 1 outings. Read this our detailed preview for more details and free betting tips.

Monaco will make another attempt to end a poor run in recent outings and possibly narrow the gap between them and fifth-placed Strasbourg. Monaco is six points adrift of top five but can they stand in the way of PSG? Our free two betting tips and predictions for this Ligue 1 fixture are as follows:

PSG is the team we are backing to score the first goal in this Ligue 1 duel with Monaco. They have the third-best away record so far and despite losing the last three away games in all competitions, PSG averages more goals than Monaco thus far. The hosts failed to score in two of their last three games and could struggle against the high spirited Parisians.

We are also backing the Parisians to win this game. The visitors won 14, drew 2 and lost only 4 of the last 20 meetings with Monaco. Moreover, PSG defeated Monaco 2-nil in the reverse game. And given that Monaco is currently struggling to score goals, PSG should make the most of it to win this game. The visitors won 3-0 against Bordeaux after getting dumped out of UCL and so, another win for PSG will edge the visitors to an early Ligue 1 crown.

For the latest team form, the best odds for Monaco vs PSG and current form of the Ligue 1 teams check the tables below.

Monaco will be without Fabregas due an ankle injury while Diatta remains out with Cruciate ligament injury.

On the other hand, the Parisians make this trip to Monaco without Di Maria due to Hamstring, Herrera is still out with an eye problem, Kurzawa, Ramos and Bernat are also injured.

The visitors, however, hope they can still get three points as they did in the reverse fixture. Key players for both teams are available for this fixture, so we can still expect a thrilling game on Sunday when these teams lock horns at Stade Louis II.

Here is how we have predicted Monaco and PSG to lineup against each other on Sunday. 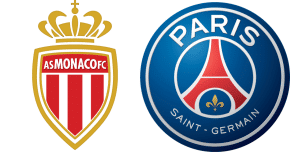 When is Monaco vs PSG game taking place?

How did these teams perform in the last five Ligue 1 matches?