The Midtjylland vs Celtic duel in the second round of Champions League qualifiers is one of the more interesting ones, especially after a draw in the first leg. So, check our in-depth preview of the game if you wish to know more about it

Our top free betting predictions for Midtjylland vs Celtic

If you are struggling to find the right Midtjylland vs Celtic bet, check our top betting tips for this game:

While this duel should be close and very exciting, we expect to see the home team taking the win at the end. Midtjylland has been one of the best teams in Denmark for a while now and they've already played in the Champions League group stages last season. Meanwhile, Celtic has been struggling on all fronts lately and the first-leg result should give the home team confidence ahead of the rematch.

We don't expect to see many goals in this game, just like we didn't think we would see them in the first leg. In fact, we were even surprised to see two goals in the first game between Midtjylland and Celtic since both teams have been struggling with realization lately, even though Celtic only played friendly matches before the first leg.

Midtjylland and Celtic to Draw at Half Time

While we expect the Danish team to win the game in the end, we don't expect them to have an easy job. In fact, we believe that the game will be even at half time. This will be a hard-fought game and both teams know that one goal will probably be the deciding factor, so they will focus on defending their own goal first.

Top odds and useful stats for Midtjylland vs Celtic

If you want to bet on the top Midtjylland vs Celtic odds, take a look at our selection of odds from the best UK bookies:

Midtjylland vs Celtic preview: A very close duel awaits us

The team from Jutland has won three titles in Denmark in the past decade, but they probably still feel in the sting of last season when they lost the title to Brondby by just one point. In any case, Midtjylland has played in the Champions League group stages last season for the first time in their history and they have a positive result from the first leg against Celtic now, so they can be optimistic ahead of the rematch.

The new season of the Scottish Premiership will start over the weekend and Celtic will certainly hope for a much better showing this season after they've lost the title last year to their fierce rival Rangers. The problem is not just that they've lost the title – it's the fact that they've finished 25 points behind Rangers in the final standings. Eliminating Midtjylland would be a great way to start the new season for them, but they have a tough task ahead after drawing in the first leg at home.

Frequent questions for Midtjylland vs Celtic 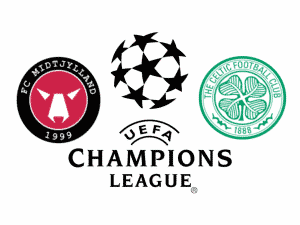