May 15th could be the day that Man City claim the 2021/22 Premier League trophy but the visitors will have to better Liverpool's result in order to seal the title with one game to spare. West Ham are still in with a very good chance of pipping Man Utd to 6th spot in the league this season but really need to beat Man City in order to achieve their goal.

Man City have won five of their last seven encounters with West Ham in all competitions and we're backing Guardiola's men to secure another win when it really matters this weekend. City do have an injury crisis in defence and that's one of the main reasons we're expecting both teams to score on Sunday. Both teams have scored in three of West ham's and four of Man City's last six outings in league and cup, adding further weight to our prediction.

Belgium superstar, Kevin De Bruyne, top scores in the Premier League for Man City this season with 15-goals, all of which have come from open play. Having netted 4-goals in midweek against Wolves, we're backing Man City's prized asset to find the back of the net against West Ham on Sunday and lead his side to victory.

West Ham vs Man City: All the latest stats

Man City could claim the title this weekend

West Ham put in a thoroughly professional performance away at Norwich last weekend, running out 4-0 winners in the end. Benrahma opened the scoring in the 12th-minute and Antonio made it 2-0 on the half-hour mark, ending his goal drought. Benrahma added a third goal in first-half stoppage-time and in the second forty-five, Lanzini converted a spot-kick to make it 4-0.

Man City's trip to Wolves in midweek was dubbed a potential banana skin by some pundits but a first-half hat trick from De Bruyne gave City and 3-1 lead at the break and the Belgian star added a fourth on the hour mark before Sterling wrapped up the scoring with the visitor's fifth goal 6-minutes from time.

West Ham: Antonio, Dawson, Ogbonna and Benrahma could miss out this weekend due to injury.

Man City: Stones, Walker, Dias, Laporte and Fernandinho are all doubts for the trip to the capital. 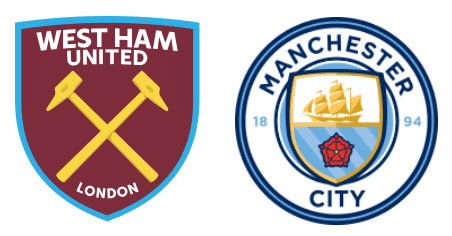