Maccabi Haifa eased to victory in the first leg. Will they do the same now they're the away side or do Apollon have something special up their sleeve? Find out with our Apollon vs Maccabi Haifa match preview with free tips, predictions and odds mentioned along the way.

An away win coming up

Apollon Limassol are having their worst run of form in almost a year; they are coming off three consecutive losses, and have no wins in their last six matches. In contrast, Maccabi Haifa have no losses in their last four games; they've been impressive lately, with consecutive 4:0 wins, including the reverse fixture of this tie. Although Apollon Limassol have the advantage of playing at home, they will be without one of their best defenders, who was sent off in the first leg; and considering they lost by a 4:0 score line in the reverse fixture, we believe that Maccabi Haifa will complete the sweep.

Maccabi Haifa have one foot in the next round already

There might be a big prize at stake for these two but, in truth, it would take the most monumental of turnarounds from Apollon to progress. Stranger things have happened in the Champions League but, after watching the first leg back, we're not sure even the footballing Gods can conjure up a revival here. Prove us wrong.

Maccabi Haifa are coming off back-to-back 4:0 wins against Apollon Limassol and Olympiacos; they are unbeaten in their last four games in all competitions. Barak Bakhar's men will be eyeing a place in the next round as they visit the Tsirion Stadium; the winner of this two-legged tie will face either Crvena Zvezda or Pyunik Yerevan in the playoff round.

A quickfire FAQ on Apollon vs Maccabi Haifa 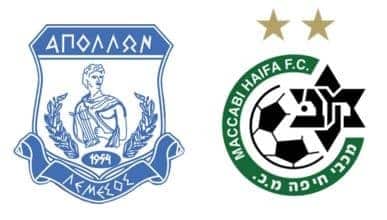