Ludogorets will meet Shamrock Rovers once again. already having one foot in the next round after the first leg. Will they avoid a huge upset? We will see in the upcoming second leg of the matchup scheduled for Tuesday, July 26th.

Check our Shamrock Rovers vs Ludogorets match preview with free tips, predictions and odds mentioned along the way.

Ludogorets have been unstoppable recently; they have won five of their last six games across the board and 12 of their last 15 games in all competitions. They also enter this match with a three-goal lead.

While some may feel that we won't see them at their best due to complacency, we don't expect that. In fact, we expect Ludogorets to win again and send Shamrock Rovers out of the competition with a couple of convincing wins.

We saw three goals in the first leg between these two teams, although all the scoring was done by Ludogorets. Still, we can see the rematch being as efficient as the first leg.

After all, Shamrock Rovers will have to attack from the start, which will leave more room for Ludogorets to punish them for their defensive mistakes. So, we can see this game going over 2.5 total goals as well.

If you need some help to find the top odds for Shamrock Rovers vs Ludogorets, check our list of odds from the best UK bookies:

Can Shamrock Rovers at least win a game before they get eliminated?

Shamrock Rovers have enjoyed some fine form in recent weeks since they were unbeaten in their last six games before the first leg against Ludogorets, which they lost by three goals. So, their chances of getting to the next stage are pretty much non-existent at this point, but hope is still alive at last. After giving some of their key players a rest over the weekend, we expect basically the same starting lineup for Shamrock as we saw in the first leg.

Ludogorets have been on fire lately; they enter this game after winning six of their last seven games, with their winning streak broken by a draw with CSKA Sofia. As a matter of fact, Ludogorets did not concede a single goal in the six games before this draw, including the first game against Shamrock Rovers.

A quickfire FAQ on Ludogorets vs Shamrock Rovers 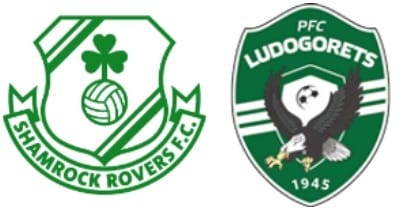