Leeds are still searching for their first win of the new Premier League season and this weekend they entertain an in-form Liverpool side. Klopp's men ar eyet to lose in their opening three matches, picking up two wins and a draw, and the visitors will be confident of maintaining that good run at Elland Road.

Our Best Betting Tips for Leeds vs Liverpool

We're backing an away win on Sunday as Liverpool have won four of their last six encounters with Leeds. As mentioned above, Leeds are yet to win a game this season while Liverpool are yet to lose one, so you can see why we're backing the away side this weekend.

There is a great chance that we will be treated to goals at both ends of the pitch on Sunday as that has been the case in four of the last six encounters between these two clubs. Both teams have also scored in four of Leeds' last five outings as well as in four of Liverpool's last six matches.

Mohamed Salah already has two goals to his name this season and looks likely to challenge for the Premier League's Golden Boot once again. The 29-year-old needed 22 league goals last season and is in negotiations to sign a new extension to his contract, proving that he and the club still feel he has plenty to offer this season and beyond.

Leeds had to settle for a share of the spoils away at Burnley before the international break after going behind to a goal from one of their former players, Chris Wood. A late equaliser from Bamford earned the visitors a deserved point much to the dismay of the home fans.

Liverpool also had to settle for a point at home to the 10-men of Chelsea last time out. The Reds went behind to a Havertz header but equalised in first-half stoppage time after James handled the ball on the goal line and the hosts were awarded a penalty which Salah converted. Liverpool really should have won the game but failed to make their one-man advantage count and it was the Chelsea fans left celebrating at the final whistle.

Leeds: Raphinha could miss this weekend's game unless his FIFA-regulated five-day isolation rule gets overturned, while Koch, Klich and Firpo are also doubts.

Liverpool: Alissson Becker and Fabio Tavares are also subject to FIFA's five-day isolation rule after playing for their country, while Milner, Elliot, Firmino, Minamino and Williams are have injury concerns that could keep them from making the trip to Leeds. 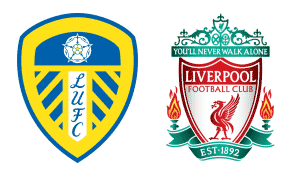