At the start of Euro 2020 England were amongst the bookmakers favourites whilst Italy were more of a dark horse. Well, the final is now upon us and the two lock horns at Wembley on Sunday. Italy have overcome a couple of big challenges to get this far – namely Belgium and Spain – whilst England have taken the perceived easier route with Germany, Ukraine and Denmark their knockout stage opponents. All of that will count for absolutely nothing as they face off on Sunday with the trophy on the line.

Read on for our full match preview and prediction for the Euro 2020 final between Italy vs England.

Italy vs England: Our tips for the final

Our recommended bookmaker for the final is Netbet!

Tip 1: England to lift the trophy

That's right, we're backing England to lift their first major trophy since 1966. In order to do so, they'll need to end Italy's unbeaten run that stretches back to September 2018; we think they've got it in them. England are on a good run of form themselves at 12 games and throughout the entire tournament they've looked like they have another gear they could find if required. Italy meanwhile gave up a couple of good chances in their semi-final; if Spain had been more clinical, they'd have won.

Tip 2: The match to end in a draw after 90 minutes

We'll be honest, we were quick to establish England as the eventual Champions. The method of victory, however, is harder to determine. We don't think it will be decided within the 90 minutes though hence we're opting for a draw in the match result market. Both England and Italy needed more than the standard 90 to progress from their semi-finals; Italy needed ET to see off Austria in the round of 16 too. Both sides are good at the back and pose a threat in the other direction. The two of them might just cancel one another out; they've drawn their last two games too.

Tip 3: Both teams to score

So, with the prediction of a draw made and having touched on the solid defences both teams boast we come to the both teams to score market. Although England have only conceded once at Euro 2020 and with Italy only twice at the 90 minute mark we think both will find the net here. Both teams are amongst the top ranked sides in both goals scored and shots on target; neither will change how they've approached games in the final so both will have chances. Finally, like with the previous tip, you can look to the h2h record as well, which shows the last four meetings have seen goals for both Italy and England.

Italy vs England: The key stats and best odds

Italy have surprised a few throughout Euro 2020 and find themselves in the final courtesy of eliminating a couple of the other big hitters in Spain and Belgium. Despite being on a terrific run to this point, they looked more than beatable in their semi-final as they fought off Spain on penalties. They'll still be without Leonardo Spinazzola, who was in the the quarters, which does take something away from their XI. In terms of sticking the ball in the net, we're still waiting for Ciro Immobile to turn up in the knockout stages; he's not scored since betting back to back in games one and two.

England conceded their first – and only – goal of the tournament against Denmark; even that wasn't from open play. Gareth Southgate was criticised early in the tournament for being too pragmatic but as time has ticked on England have remained reasonably resolute whilst offering a goal threat. With Harry Kane and Raheem Sterling both in good scoring form the battle between them and Italy's Leonardo Bonucci and Giorgio Chiellini will be enthralling.

England look set to arrive in the final with a clean bill of health; that means Southgate will have plenty of decisions to make. Defensively, he'll need to decide between a four or five man back line whilst there are a plethora of attacking options for him to chew over. Kane and Sterling are absolute bankers to start regardless of system but there is likely to be at least one spot where the manager has a very tough call to make.

For Roberto Mancini, his squad is looking in good shape too; the only exclusion being Spinazzola. That is a blow but Emerson does slot in as a like for like replacement. Alternatively, Rafael Toloi might get the nod for his second start of the tournament. The other call he needs to make is on whether or not Federico Chiesa starts; Chiesa has started the last two games but has been on the bench three times in this competition as well. 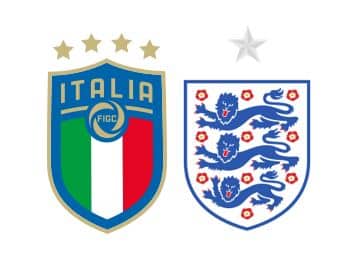