FW Predictions for Horsens vs Lyngby

Matchday 2 is upon us and already we pit the two newly-promoted teams against one another as Horsens play host to Lyngby. The hosts secured a shock away win against the mighty Copenhagen on the opening day of the campaign while Lyngby played out a creditable 2-2 draw with Silkeborg but who will come out on top this Monday?

We're predicting a home win for Horsens due to their recent record against Lyngby and the manner of their opening day victory. Horsens have secured four wins from their last five encounters with Lyngby, winning both of the pair's meetings in 2022 so far. Last weekend Horsens made the headlines when they secured an away win at one of this season's expected title challengers, Copenhagen, a result that will surely give Monday's hosts a huge boost in confidence.

There is a good chance that we will be treated to goals at both ends of the pitch in this game as five of the last six league meetings between Horsens and Lyngby have gone the same way, including both of their encounters in 2022 so far which saw Horsens win 2-1 on each occasion. Both teams have also scored in three of Horsens' last four fixtures and in both of Lyngby's last two matches, adding further weight to our prediction for Monday's Superliga match-up.

Horsens vs Lyngby: The Latest Stats and Markets

Can Horsens build on their epic away win against Copenhagen?

Nobody gave Horsens a chance away at Copenhagen in the opening round of fixtures for the new Superliga season, not even us. However, the visitors managed to get in at the break goalless and just after the hour mark, Horsens created their best chance of the game and took it. Jacobsen setting up Musonda to score what would turn out to be the winning goal of the game. Newly-promoted Horsens are up and running for the season and a result like this could spur them on to finish above the relegation places.

Lyngby's first test back in the Superliga was at home to Silkeborg, a game the hosts will feel they should have won after taking a two-goal lead. Riis fired Lyngby in front just before the break and early in the second half, the hosts were awarded a penalty which Kristensen converted to double the home sides' advantage. However, Silkeborg pulled a goal back 4-minutes later and the visitors then started to dominate the game, eventually equalising 12-minutes from time. Still, a point on the opening day of the season is always a positive for any newly-promoted team and a win on Monday would take Lyngby above Horsens.

Horsens: the hosts have a clean bill of health ahead of Monday's Superliga clash.

Lyngby: Bjelland is the main injury concern for the visitors having been subbed off in the first half against Silkeborg. 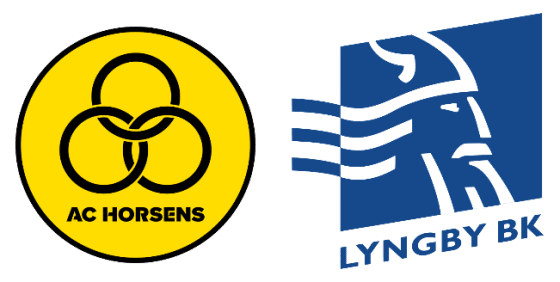