Heerenveen are yet to lose a game this season. Can NEC end that run? Find out with our Heerenveen vs NEC match preview with free tips, predictions and odds mentioned along the way.

NEC to take at least a point

Heerenveen have picked up some momentum over the course of their Eredivisie campaign; they drew their first two league games, but then went on to win their next two. As a matter of fact, Heerenveen are unbeaten in their last seven matches in all competitions; they've won four of those games, with three draws. On the other hand, NEC Nijmegen have had a fairly decent run recently; as they have no losses in their last three matches. Although Heerenveen are the favourites here, we should point out that they usually struggle against NEC Nijmegen; in fact, Heerenveen have no wins in the last eight encounters between these teams. And for this reason, we believe that NEC Nijmegen will not return empty-handed from this trip.

Meetings between Heerenveen and NEC Nijmegen have mostly been low-scoring matches; as their last three, and five of their last six clashes saw less than three goals scored. In the same vein, NEC Nijmegen's recent games have not featured plenty of goals; as three of their last five games went under 2.5. Additionally, Heerenveen kept three clean sheets in their last four games; and taking everything into account, we shouldn't expect a lot of goals in this match.

Here are the key stats & form guide for Heerenveen vs NEC

Both of these sides have made a decent start to the new season with both located in the top half of the Eredivisie. Heerenveen, in particular, will be keen to keep that good start going with their record currently unbeaten. That said, motivation won't be a problem for NEC; should they win, they'll move level on points with their hosts.

Kees Van Wonderen will be pleased to have a fully healthy group of players to choose from; as Heerenveen have no injuries or suspensions going into this match. Also, Heerenveen brought in Antoine Colassin on loan from Anderlecht a couple of days ago; how much of an impact will he have on this team?

NEC Nijmegen have no major injury concerns heading into this match; with the exception of Mathias De Wolf, who is recovering from a hamstring injury, they have a clean bill of health. Additionally, NEC Nijmegen strengthened their squad with two new additions a couple of days ago.

A quickfire FAQ on Heerenveen vs NEC 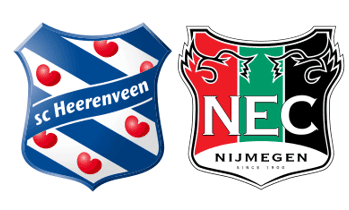