The Top Two Tips for Genoa vs Empoli

Genoa will be hoping to build on the back of their impressive draw with Inter Milan last time out as the hosts continue their battle against relegation from Serie A. Empoli are in the midst of a poor run of form but certainly have the quality to punish any Genoa mistakes this weekend.

Four of the last seven head-to-heads between these two clubs have produced under 2.5 goals, and we're expecting another tight and tense 90-minutes on Sunday. Each of Genoa's last five league games have witnessed fewer than three goals scored and three of Empoli's last four matches have also produced under 2.5 goals, so you can see why we're predicting a goal-shy 90-minute in Serie A's lunchtime kick-off.

These two teams played out a draw when they met in Empoli back in November and we're predicting another stalemate between the pair this weekend. Each of Geona's last five games have ended in draws, three of which have finished goalless, while Empoli have failed to win any of their last six matches in league and cup, drawing two of their last four league games.

Nobody gave Genoa a chance against Inter Milan last time out but the struggling side surprised us all by hanging on for a goalless draw at home against the current Serie A champions. Despite that positive result, Genoa have drawn each of their last five matches and remain 8pts from safety, so a win is the order of the day against Empoli.

Empoli and Juventus produced a 5-goal thriller when they went head-to-head in Serie A last weekend. Juve went in front just after the half-hour mark but Zurkoweski equalised moments later. However, Juve still went in at the break a goal to the good following a first-half stoppage time effort from Vlahovic. That very same player was on the mark again for the visitors in the 66th-minute, making the scoreline 3-1, and although La Mantia pulled a goal back for Empoli 10-minutes later, the game ended in defeat for the hosts.

Genoa: Cambiaso, Maksimovic, Vanheusden, Piccoli, Criscito and Bani are all doubts for the home side.

Empoli: Ardian Ismajli is suspended after picking up another yellow card last time out, while Marchizza and Haas look set to miss the game through injury. 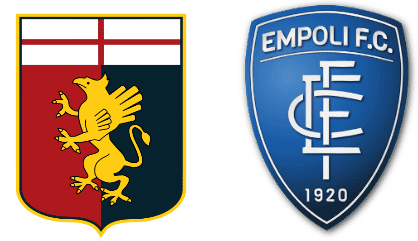