Eintracht Frankfurt take on Wolfsburg at Deutsche Bank Park in the Bundesliga on Saturday, September 10th. Frankfurt are aiming to win for the third time on the bounce in the league. Read our free predictions and find the latest odds for the fixture below in our detailed match preview.

Wolfsburg have lost three of their last four Bundesliga assignments ahead of their trip to play Eintracht Frankfurt on Saturday. Read our top predictions for this weekend’s fixture below.

Wolfsburg lost for the third time in four games when they were beaten 4-2 at home by FC Cologne last weekend when Die Wolfe went into full self-destruct mode, conceding an own goal and a penalty during an error-strewn 90 minutes. Eintracht Frankfurt meanwhile, made it two wins on the trot with a superb 4-0 demolition job on a fancied RB Leipzig side and with their tails up, Die Adler should be able to swoop in for another three points against an out-of-sorts Wolfsburg.

Eintracht Frankfurt have really stepped on the gas in recent weeks and they put four goals past successive opponents with meaty wins over Werder Bremen and RB Leipzig in their last two assignments. Wolfsburg conceded four times in their last match against a usually goal-shy Cologne side and on Saturday, Die Wolfe’s limp defence comes up against a razor-sharp Frankfurt frontline. That looks like a recipe for goals and bettors are advised to back over 2.5 of them to hit the net this weekend.

Top Betting Odds and Stats for Eintracht Frankfurt vs Wolfsburg

View our rundown of the top stats for Saturday’s fixture below alongside a tool to help you choose best odds.

Read all of the latest injury updates and team news for Saturday’s Bundesliga duel between Eintracht Frankfurt and Wolfsburg below.

Sebastian Rode, Luca Pellegrini and Almamy Toure are all listed as injured for Eintracht Frankfurt this weekend. Die Adler played Sporting Lisbon in the Champions League in midweek and Head Coach Oliver Glasner ill hope that fatigue isn't a factor this weekend following their exertions.

Defender Jerome Rousillon is expected to be out until November, while midfielders Patrick Wimmer and Yannick Gerhardt are both out of action until later this month. Further forward, Jonas Wind is still having issues with a hip injury and will miss Saturday's game. 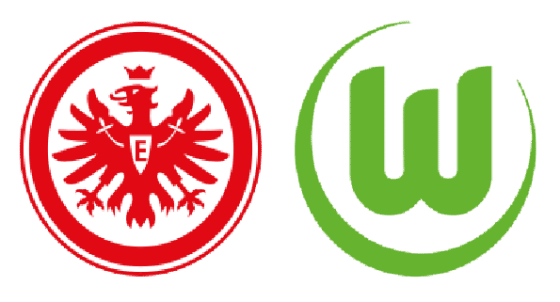 We recommend checking out the odds at Stake and 888Sport for Eintracht Frankfurt’s clash with Wolfsburg.

Freiburg are currently top of the pile in the Bundesliga.