After an impressive victory against AZ Alkmaar, Feyenoord is ready to take over the top of the Eredivisie.

Feyenoord has been lethal up front, and after scoring three goals against AZ Alkmaar they will be ready for further punishment upon the visiting Fortuna Sittard. The hosts are 5-5 this season when it comes to covering over 3.5 goals while Fortuna is 3-7 in favor of ‘under'. In their h2h matchup, three out of their past four matches went over the 3.5 goal mark.

Feyenoord has lost only one point at home this season with a perfect goal difference of 9-0. Fortuna is one of the most surprising teams this season, but they are also a team that struggles away from home with only four points out of four matches.

Preview and key information about Feyenoord vs Fortuna Sittard

Feyenoord has been nothing but fantastic at home outscoring all but one opponent. In their first game of the season at home, Feyenoord only took a goalless draw against Heerenveen. But, after that match, they had three straight wins against Emmen, Sparta, and Twente without conceding a goal. Last season Feyenoord demolished Fortuna at home 5-0, and more of the same happens on a historical level between these two clubs. Coach Arne Slot found a real gem in former Ajax forward Danilo who is the club's top scorer with seven goals. But, the main strength of this team is their teamwork ethic. They seem to outpace their opponents which were shown against AZ Alkmaar. Feyenoord tries to focus on dominating teams in the midfield which should be evident against Fortuna.

After losing at home to Utrecht 4-3, Fortuna has managed to stay undefeated in five straight matches taking three victories in the process. They did have a streak of games against opposition from the lower part of the ranking table, but to their credit, they knew how to take advantage of that fact. Playing good football, and winning games brought them to the tenth spot in the league table. Feyenoord will be their biggest challenge in some time, but as all the pressure will be on the home side, Fortuna players will have a chance to prove themselves on a higher level against a championship contender. The visiting team's undefeated streak started with the hiring of Spanish coach Julio Velazquez who managed to find the right balance in his team. Experienced Turkish striker Burak Yilmaz is their best scorer with four goals.

Fortuna Sittard: Deroy Duarte will miss the game because of injury. 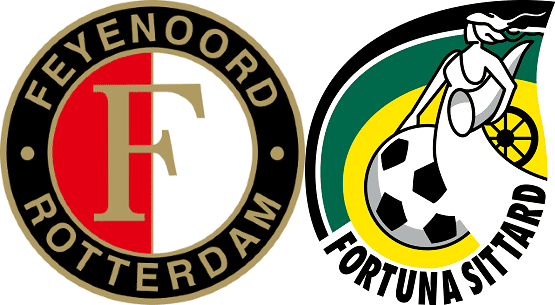