The world famous De Klassieker is here. Ajax dominate the history books with 60 wins compared to Feyenoord's 30. Who will add to their tally of wins come Sunday? Find out with our Feyenoord vs Ajax match preview with free tips, predictions and odds mentioned along the way.

There is a reason that Ajax sit 14 points clear at the top of the table and that reason is that they're by far the best team in the division. Feyenoord are no mugs but they have struggled against the stronger sides this season. That's one part of our logic for backing Ajax to win. The other two components look at recent form, which will tell you that Feyenoord have failed to take maximum points in four of their last six matches including the last two whilst Ajax's only blemish across their previous 10 games came in European competition. Finally, to really drive this point home, you have the head to head to consider. Ajax have won the last three.

Three points and a clean sheet

Let's start in reverse order. In our first prediction we've just touched on the three head to head wins Ajax have recorded in the past three meetings. What we didn't detail is the fact that all of those victories have been won to nil. You could roll that back slightly further to look at the previous six meetings and the stats will show Ajax have beat Feyenoord five times without conceding. It's not all based on historic matches though. Ajax have won their last two games without giving up a goal. Feyenoord don't usually have trouble finding the net with 18 scored in their last 10 but, let's face it, they don't play Ajax every week.

Expect the game to rain goals

Whether you're on board with our tips to this point or not, the chances are you won't disagree with our prediction that we expect Feyenoord vs Ajax to deliver over 2.5 goals. The stats for the season to date show Ajax games feature 3.7 goals whilst Feyenoord's come in lighter at 3.0 but still comfortably above the all important cut off for this bet. When looking at more recent results, the numbers still suggest there is good value to be had with this bet. Feyenoord's average remains unchanged at 3.0 across their last 10 with Ajax coming in at 3.1. Oh, and seven of the last 10 head to heads have gone over 2.5 too.

There is a lot to be admired about Ajax. They are Champions by a country mile but still have their foot to the floor as the season reaches it's climax. A end of season game with Feyenoord will always increase interest though and there is no doubting that the match will be an entertaining watch.

Feyenoord vs Ajax: A brief FAQ 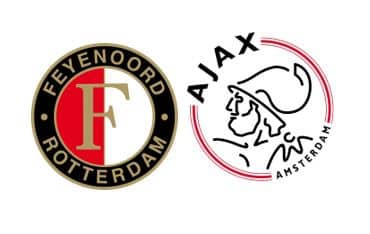