F91 Dudelange take on Tirana in a Champions League qualification clash on Tuesday, July 12th. Can Tirana overcome the deficit from the first leg? Read our free predictions and find the latest odds for the fixture below in our detailed match preview.

If you are not sure what is the right bet for the Tirana vs F91 Dudelange duel, check our top betting tips for this game:

Even though F91 Dudelange didn't have the best of times in Europe last season after failing to qualify for Europa Conference League, they seem to be ready to take on the challenge this season.

While we didn't see both teams score in the first leg between Tirana and F91 Dudelange, we can see that happening in the second leg of this matchup.

The reason lies in the fact that both teams scored in four of the last five Tirana matches in all competitions, but also in the fact that they have to chase a goal, which will also open up a lot of space for the guests to score as well.

Top Betting Odds and Stats for Tirana vs F91 Dudelange

Read our rundown of the best stats for Tuesday's qualifier below alongside a tool to help you choose the best odds.

Read all of the most up to date injury info and team news for this Tuesday's Champions League qualification tussle between Tirana and F91 Dudelange below.

Tirana eased to their 26th Albanian title last term, eventually winning the title by ten points. However, the team started the new season with a loss to Dudelange and they now have to overcome a one-goal advantage if they want to reach the next stage of the Qualifiers.

Meanwhile, team has a clean bill of health ahead of the second leg of the CL Qualifirs, but they will miss Vessel Limaj in this game since he has to serve a suspension after being sent off in the first leg.

Dudelange celebrated their 16th title in Luxembourg last season, though little is expected of the minnows in this year's Champions League qualifiers. That being said, the team has a positive result from the first leg and reaching the next stage of the Qualifiers is not out of the realm of possibility for Dudelange.

When it comes to team news, Mehdi Kirch will miss out the second leg due to his red card in the first leg, so we can see Sylvio Ouassiero taking his place in the side. 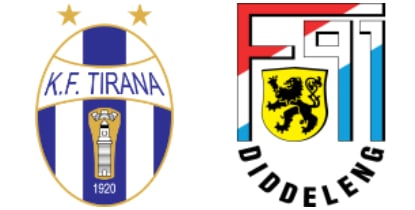