The pressure is on Arsenal to win their final game of the season but even that might not be enough to see them finish ahead of their local rivals Tottenham in the Premier League. Everton provide the opposition at the Emirates on Sunday 22nd May and after securing their Premier League status in midweek, the Toffees are bound to be in celebration mode.

There is a good chance that we will be treated to goals at both ends of the pitch this weekend as that is the way three of the last four meetings between Arsenal and Everton have finished. Four of the Gunners' last six outings have ended with both teams scoring while three of Everton's last four league games have witnessed both teams scoring, so you can see why we're not backing either side to keep their clean sheet intact on Sunday.

At least three goals have been scored in three of the last four meetings between these two clubs and we're predicting that the goals will flow on the final day of the season as well. Five of Arsenal's last six outings in the league have seen over 2.5 goals scored and the same can be said for three of Everton's last four fixtures, adding further weight to our second prediction for this weekend's clash.

Arsenal made the trip to St James' Park to face Newcastle last time out and ended up on the end of a 2-0 defeat. An own goal from White put the home side in front 10-minutes into the second half, following a goalless opening first forty-five. As Arsenal pushed for an equaliser it left gaps in their defence and Newcastle made sure of the win 5-minutes from time when Guimaraes made it 2-0. Arsenal are now the outsiders to secure fourth place in the Premier League with Tottenham sitting 2pts better off and with a vastly better goal difference.

Everton knew that a win at home to Crystal Palace on Thursday would ensure their Premier League status for another season but the Toffees found themselves 2-0 down at the break. Dele Alli came on at half-time for Andre Gomes and that gave Everton much more purpose going forward. A long free-kick into the box found its way to Keane who finished clinically with his weaker foot to get the Toffees back into the game. Dele was involved in the equaliser as his cross rebounded to Richarlison who managed to squeeze the ball home via a deflection. With 5-minutes of the 90 remaining, Gray whipped in a free-kick which Calvert-Lewin got on the end in the style of Big Dunc and Andy Gray, planting his diving header passed Butland in the Palace goal to secure a memorable 3-2 win.

Arsenal: Holding is suspended, while Tierney, Partey and Tomiyasu all look set to miss out on the final game due to injury.

Everton: Patterson, Mina, Delph and Townsend are likely to miss the trip to the capital through injury, while Branthwaite and Rondon are both suspended.

Your Questions for Arsenal vs Everton 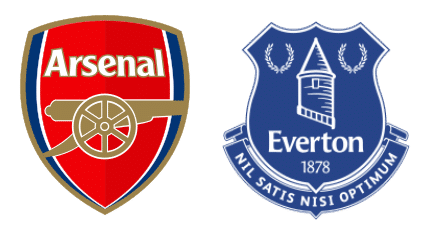