The second Euro 2020 semi-final is upon us and this will be a good one. England finally beat Germany after 20 years and then cruised past Ukraine to come back home for this monumental game. Denmark, on the other hand, had a terrible start of the tournament, not only because they lost twice in a row but because of the near-death incident with their superstar Christian Eriksen.

Tensions are high, but our team has found 3 markets that we think are fine to bet on so here we go.

England vs Denmark: Our experts top free predictions on the match

Here are the top three tips we have prepared for this semi-final clash.

The odds are true at the time this article was published. Always check our slip prior to placing a wager. We recommend betting with Netbet for this match.

This bet is purely because of what Denmark have displayed so far and also because we think that England may start a little bit tentatively in such an important match. The Danes have not lost a first half in 17 straight matches. This is why we see decent value here at ½ for Denmark to either win or draw the first half.

Both Teams to score in the second half – Yes

The value we see here is very good given the stats that the two teams have generated. Denmark has scored a goal after the 75th minute in 6 of their 9 international matches. This is a very interesting trend that may even decide the outcome of that semi-final. The Three Lions have netted a second-half goal in 3 of their 5 Euro 2020 matches. Odds of 53/20 is something that we can’t sleep on here.

Regardless of the outcome, because of the trend, we outlined above and because of the extra motivation in such matches, we think that Denmark will score last. Even if they are losing 2-0 or 3-0, we see them fighting to score a goal and England may even let up a little bit. Odds of 43/20 give us excellent value and this is why this tip made our top 3.

Along with the head-to-head results, see some other numbers and some compared odds.

England vs Denmark: A preview of both teams’ form

You’ve already seen our prediction above but now let’s outline the most important traits that our experts have noticed in both team’s recent games.

It appears that England is still gaining momentum and may peak at the right time. It is incredible that a team may still be gaining momentum after 7 consecutive clean sheets across all competitions but that’s exactly what we have at hand. That’s because while England’s defense has been relentless so far, the attack has not impressed us. However, the 4-0 victory against Ukraine came at the right time as it will surely lift the spirits of the whole squad.

Statistically, England has not had a 3+-goal victory in a major international tournament since 2002 which was…you know, 19 years ago.

Key Player: Harry Kane. Undoubtedly, the main threat of the Three Lions is their striker who is now just a goal behind Garu Lineker in the all-time national scorer list with 9.

How has Denmark fared in the tournament?

With Denmark, the attack has been the story over the last 3 matches. In that period, the team has netted 10 goals and they show no signs of stopping. This match may be a classic example of an unstoppable force meeting an immovable object. Ever since the disappointing start with two straight losses in the first two matches of the tournament, the Danes have been on a tear and have a goal difference of 10:2. Undoubtedly, the team has rallied after Christian Eriksen’s incident in the first game, and this something team captain Simon Kjaer confirmed.

Key Player: Kasper Dolberg. The young center forward really stepped up in the knockout rounds scoring 3 goals for Denmark and will surely look to improve on that mark.

It appears that manager Gareth Southgate found a good-working formula against Ukraine which was slightly different than the one used against Germany. Our prediction is that Bukayo Saka will not start because he hasn’t been all that impressive all tournament. Instead, putting Mason Mount around or behind Kane makes sense.

As for Denmark, there has been no change in the previous two matches and we see no reason for Kasper Hjulmand to tweak anything.

No team has even had a yellow card in the previous match. 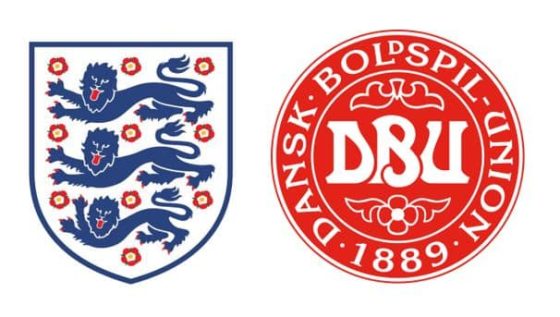 FAQ about the England vs Denmark Semi-final