Derby vs Peterborough: Check out our betting tips

This week was earmarked as a pivotal one for Peterborough's survival battle. Will they find a way of taking maximum points here? Find out with our Sheffield United vs Swansea match preview with free tips, predictions and odds mentioned along the way.

There is no question that this match is likely to be a rather cagey affair with so much at stake but we just fancy Derby to shade it. There isn't masses to separate the sides in terms of recent form with both teams' last five games reading as three losses, one draw and a win. Of course, in Peterborough's case, one of those games – the win – came in the cup so in pure league form, they do end up a couple of points worse off than their hosts. The big difference maker in this game though is the home crowd; there is no expectation that Derby stay up after what they've been through off the pitch. The fans adore what Wayne Rooney and co have done this season and that atmosphere could be the extra percent or two the Rams need to grab a win.

Rams to record a shutout

Yes, we've made our bet that Derby win this game. One of the key things behind that thought process is because of how poor Peterborough's attack is. They've failed to score in their last four league games. Derby meanwhile are capable of keeping things tight; they've only conceded 35 goals all season – that's fewer than some sides in the playoff places and 25 fewer than Peterborough.

Here are the key stats & form guide for Derby vs Peterborough

If either of these teams are going to get out of the relegation zone then you expect they'll need to take maximum points from a game like this; a draw is little good for anybody really. It could make for a good game.

When Derby were hit with a 21 point penalty nobody gave them a chance of staying in the league. Now, they are right in the mix and this game could see them move up to third from bottom. Can they continue to deliver performances as the pressure starts to crank?

Peterborough are in big danger of going back to League One after failing to beat fourth bottom Reading in the week. This game now has huge amounts riding on it and, arguably, comes with greater pressure for Posh than for the hosts. 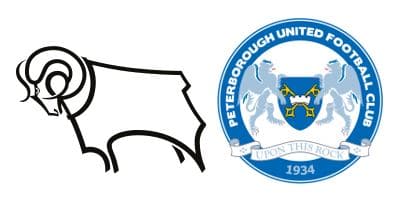