It is the time of year when dead rubber fixtures come around every week, who will win this one? Find out with our Blackpool vs Derby match preview with free tips, predictions and odds mentioned along the way.

First of all, we would like to point out that Derby have just two wins in their last eight games; they lost five of those games, with one draw. Also, it's worth noting that Derby's last six, and 11 of their last 12 wins came at home; they've struggled away from home this season, with just two wins in 22 road games. On the other hand, Blackpool have had a fairly decent record at home, having won 11 of their 22 home games; they have no losses in their last three games, with two wins and a draw. Considering Derby have lost all of their last 10 road games, we believe that Blackpool will win.

Both sides to find the net

Although Derby have struggled to win games recently, they've held their own when it comes to scoring goals. Wayne Rooney's men found the net in six of their last seven games; conversely, they also conceded in six of those seven games. Just like Derby, Blackpool have also scored and conceded a lot of goals recently; like Derby, they scored in six of their last seven games, whilst conceding in six of those games. Both teams scored in four of Blackpool's last five, and in three of Derby's last four games; and for this reason, we should expect goals at both ends.

Here are the key stats & form guide for Blackpool vs Derby

Blackpool vs Derby: Let's look at the predicted lineups

We're not sure anyone would disagree that Derby are a bigger club than Blackpool; it's not mattered this season though because as Derby have fallen through the trapdoor, Blackpool have kept themselves well clear of the danger they were tipped to be in. They'd have finished above the Rams even without the penalty of 21 points as well!

Blackpool are coming off a 2:0 win at Barnsley; they've been playing well recently, with no losses in their last three games. Neil Critchley's men will welcome a relegated Derby side to Bloomfield Road on Saturday; they'll hope to extend their unbeaten run to four games.

Derby are coming off back-to-back losses against Bristol City and Queens Park Rangers; they've suffered three losses in their last four games. Wayne Rooney's men have already been relegated to League One, so they don't have much left to play for; however, they'll hope to put an end to Blackpool's unbeaten run.

A quickfire FAQ on Blackpool vs Derby 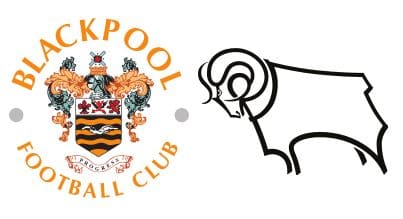