One of the more interesting matches in the upcoming La Liga round is the Barcelona vs Celta Vigo duel, so check our preview of the game if you want to know more about it.

Our free betting tips and predictions for Barcelona vs Celta Vigo

If you are unsure what is the best bet for the Barcelona vs Celta Vigo duel, check our top betting picks for this match:

Although Barcelona secured a spot in the Champions League for next season, they'll be looking to win their third game in a row in La Liga in this game.

Meanwhile, Celta Vigo is also without a motive in the game since they are stuck in the middle of the standings. They've won two of their last four games, but they've struggled against Barcelona in the past and that is expected in this game as well. In fact, Barcelona beat Celta Vigo by two or more goals in three of their last five meetings, so that's our prediction for this game as well.

We've seen four or more goals in four of the last five head-to-head duels between Barcelona and Celta Vigo, including their last game that ended in a 3-3 draw.

So, we won't be surprised at all if this game went over 3.5 total goals. That being said, Celta Vigo averaged just 2.26 goals per game this season in La Liga, but Barcelona averaged 2.86 goals per game in the league so far.

The latest odds and useful stats for Barcelona vs Celta Vigo

If you want to bet on the best La Liga odds, you've come to the right place. Here are the top odds for Barcelona vs Celta Vigo:

Barcelona vs Celta Vigo preview: Can Barcelona get back to winning?

While the home team is the clear favourite in this game, it could still be an interesting match. So, let's take a better look at both teams now:

Three games remain to be played in the Spanish league and Barcelona is currently second. More importantly, they definitely secured a spot in Champions League for next season. However, it's hard to imagine that the fan are pleased with this season since Blaugrana failed to win any trophies, including Europa League where they were huge favourites.

Meanwhile, the team will be without Nino Gonzalez, Sergi Roberto, Gerard Pique, and Pedri through injuries, while Sergio Busquets is out of the next game to serve a suspension.

With just one win in the last six games in La Liga, Celta Vigo is clearly just waiting for the season to end. After all, that's understandable since the team is stuck in the middle of the standings and they can't move much up or down in the remaining four rounds. Still, their fans will likely hope for a good performance in the next game.

When it comes to team news, only Hugo Mallo has been ruled out of the upcoming match with Barcelona, while the rest of the team is in good shape right now.

The usual questions for Barcelona vs Celta Vigo 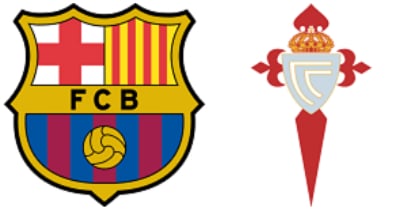