One of the closest matchups in the upcoming League Cup round is the Shrewsbury vs Carlisle duel, so check our preview of this game to learn more about it and to get some free betting tips.

If you are unsure what is the right bet for Shrewsbury vs Carlisle, take a look at our top betting picks for this duel right here:

Although Shrewsbury failed to get a win in their first two games in the new League One season, while Carlisle has four points in League Two after the first two rounds, we still expect the home team to win this game.

After all, they are playing in the league above, which alone is reason enough to see them as favourites. On top of that, they are playing at home and they beat Carlisle in the previous three meetings between these teams.

We saw three or more goals in two of the last three head-to-head duels between Shrewsbury and Carlisle, but we don't expect that to happen when they meet again on Tuesday.

The reason is simple enough – Shrewsbury has gone under 2.5 total goals in both of their games in League One this season, while the same thing happened to Carlisle in their two games at the start of the new League Two season.

The top odds and useful stats for Shrewsbury vs Carlisle

If you want to check out some of the best odds and stats for Shrewsbury vs Carlisle, you are in the right place:

This can be a very interesting matchup, so let's take a better look at both teams before they meet up:

Last season in League One, Shrewsbury finished in the eighteenth place in the standings, but they were also ten points clear of the first team in the relegation zone and never really had to fear of it. However, the team started the new season in poor form as well, with one point from the first two games in the league.

Meanwhile, Tom Flanagan will have to miss this game to serve a suspension, while Elliott Bennett is out with an injury. Also, Aiden O'Brien is still questionable with a hip problem, but should be able to start.

After they finished the last season in League Two in the twentieth place in the standings, Carlisle and their fans are hoping to do much better this season. To their credit, the team started the new season with a win and a draw in the first two rounds in the league, so they seem to be in good form right now.

When it comes to team news, Sho-Silva remains out with an injury, while Dickenson, Guy, and Devitt are all under questions, but more likely to play than sit out. 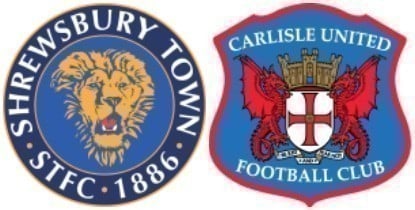