This game sees third from bottom take on fifth from bottom. With plenty at stake, this game could be huge. Who wins? Find out with our Cardiff vs Peterborough match preview with free tips, predictions and odds mentioned along the way.

Bluebirds to fly to victory

Although Cardiff lost their last game, it's worth noting that they played against Liverpool, one of the best teams in the World; Steve Morison's men have won their last two league games. On the other hand, Peterborough have struggled to win games in the Championship; they are without a win in their last five games, and they've lost four of those games. Also, Peterborough have been the worst road team in the Championship; they've won just one of 14 games they've played away from home, and they've lost 12 of those games. With this in mind, we're predicting a win for Cardiff.

Check out the key stats & form for Cardiff vs Peterborough

Peterborough occupy the final relegation spot as the current time and trail Cardiff by nine points. If they win this game and their game in hand then it will start to look rather bleak for the Bluebirds. By contrast, if Cardiff can put 12 points between them and the drop zone then the end to the season might be comfortable.

Cardiff's FA Cup campaign ended at Anfield last weekend, now they have just the league to focus on. Steve Morison's men are 20th on the Championship table, just two spots above the relegation zone; they'll hope to add some more points to their tally as Peterborough come visiting.

Peterborough advanced to the fifth round of the FA Cup by knocking out QPR last weekend; unfortunately, Peterborough's last two wins were in the FA Cup, they haven't done too well in the Championship lately. Darren Ferguson's men are in the relegation zone, and they have no wins in their last five league games; will they be able to put an end to that unwanted streak?

A brief FAQ ahead of Cardiff vs Peterborough 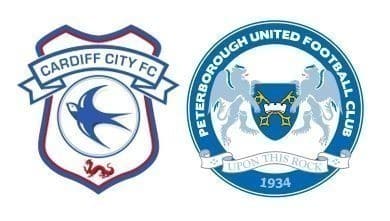