After midweek action, League Two resumes action over the weekend. Abbey Stadium will witness hosts Cambridge United take on the challenge of Stevenage for the three points on offer. We have done extensive research for this fixture, and bring you the top free betting tips, predictions, odds, and match previews.

Here is what our experts came up with after reviewing all the data and statistics for the upcoming Tuesday match. Unbiased tips

The Yellows bounced back from their unsavoury defeat to Exter with successive wins on the road. They return to Abbey Stadium needing a win to maintain their place at the top of League Two's points table. Mark Bonner's side are favourites to take the points on offer as Stevenage arrive on the back of three successive defeats.

In their last three games, Cambridge have been involved in twelve goals, including nine past their rivals. This run has coincided with Stevenage only hitting the back of the net once, whilst letting in four goals. Both Mark Bonner and Alex Revell will want their attackers to fulfil their responsibilities. The former to prove their attacking prowess, and the latter to rid themselves of their barren run.

Both Teams to Score: Yes

Stevenage have only scored twice in their last five games. Meanwhile, Cambridge have only seen a solitary clean-sheet in the same time period. With the hosts needing a win for their title charge, it will be an open game with chances on both ends. Expect Stevenage's profligate strikers to make something out of the opportunities created.

With three games until the end of the campaign, Stevenage only have midtable obscurity to look forward to. However, they can spring trouble for Cambridge United, who have a two-point lead at the top of League Two but have played a game more. In their last two H2H meetings, it has been Stevenage who have claimed bragging rights with two successive wins. Another win for the Boro will not only dent Cambridge United's title aspirations but also send the League Two title race wide open. 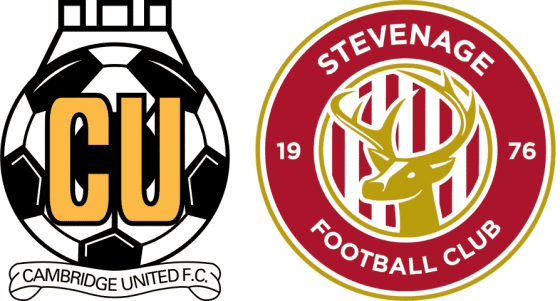 Questions & Answers Regarding the Cambridge vs Stevenage Fixture

Where is the game being played?– The game is played at Abbey Stadium.

Who is the favourite? – Cambridge United are favourites in the fixture @ 23/20.

Where can I find more free betting tips? – You can check out our other Football Betting Tips for more predictions.