Cambridge and Exeter meet for an FA Cup second round clash at the Abbey Stadium on Saturday. A dangerous Exeter team take on League One side Cambridge in the cup. Read our expert predictions and find the latest odds for the game below in our match preview.

Exeter have lost just one of their last 19 matches in all competitions ahead of their trip to play Cambridge in the FA Cup. Find our top three predictions for the contest below.

Exeter had to overcome a first round replay against Bradford to set up Saturday’s FA Cup clash with Cambridge and the confident Grecians could pose a significant threat to their League One hosts. Exeter have lost just once in 19 matches ahead of this weekend’s tussle, while Cambridge have recorded victories in only two of their last eight assignments. The formbook is definitely on the visitor’s side here, so back them in the double chance market.

A glance at Cambridge and Exeter’s respective recent records should enthuse bettors on the hunt for both teams to score options this weekend. BTTS has been a winning bet in six of The U’s last eight fixtures, while a wager in the same market would have returned dividends in 100% of Exeter’s last 15 tussles in league and cup. With plenty to go on here, backing both teams to score appeals again on Saturday.

Games featuring Exeter have been packed to the hilt with excitement in recent months and the Grecians’ supporters rarely leave a match without being entertained. Indeed, 12 of their last 14 fixtures produced over 2.5 goals and their attack-minded philosophy should ensure that their cup tie at Cambridge gets fans on the edge of their seats again. Five of The U’s last six skirmishes also delivered at least three goals, so stick to the goals markets here.

A return of just two wins from their last eight matches has left Cambridge looking a little short of confidence and Mark Bonner’s charges will fear a cup upset at the hands of Exeter on Saturday. At the Abbey Stadium, The U’s have won just three times in their last ten home tests and that vulnerability on their own patch could be exposed this weekend.

Exeter meanwhile, continue to pull up trees under Matthew Taylor and only one opponent has got the better of the Grecians in their last 19 fixtures. With their League Two promotion charge firmly on track, City will hope to maintain their momentum with a run in the FA Cup and Exeter have the tools to cause another shock or two in this season’s competition. 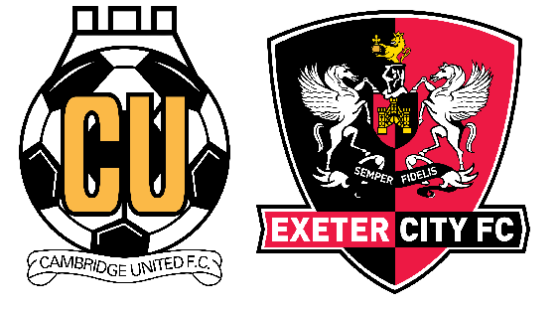 Cambridge have been priced as favourites to beat Exeter this weekend.

Saturday’s game is being contested at the Abbey Stadium in Cambridge.