Venezia might already be relegated but visitors Cagliari are still in with a chance of avoiding the drop on teh final day of the season. Cagliari sit 2pts behind fourth from bottom Salernitana in the Serie A so need a win on the final day of the campaign and have to hope that their rivals fail to win at home to Udinese in order to pull off the great escape.

There is a good chance that we will be treated to goals at both ends of the pitch this Sunday as five of the last seven encounters between these two clubs have ended the very same way. Each of Venezia's last five league games have ended with both teams getting on the scoreboard while both teams have scored in five of Cagliari's last seven fixtures, adding further weight to our first prediction for Sunday's match.

At least three goals have been scored in five of the last seven meetings between Venezia and Cagliari, and we're expecting the goals to flow this Sunday as well. Five of the host's and four of the visitor's last seven outings in Serie A have witnessed over 2.5 goals scored, so you can see why we're predicting goals in this game.

Venezia vs Cagliari – the latest stats

A win will confirm Salernitana's Serie A status

Venezia came so close to the win they needed to remain in the race to escape relegated after taking the lead away at Roma in the very 1st-minute through Okereke. However, Kiyine was sent-off in the 32nd-minute and Roma controlled the game from that point on, eventually equalising 14-minutes from time through Shomurodov. A 1-1 draw wasn't enough to stop Venezia from getting relegated from Serie A but we have a feeling they might be back at the first attempt.

Cagliari faced an uphill task at home to Inter Milan last time out. The visitors were 2-0 in front before Lykogiannis pulled a goal back for Cagliari in the 54th-minute but Inter restored their 2-goal lead 6-minutes from time to confirm their victory. Cagliari are still in with a chance of escaping the drop but it's going to be tough as they need a win and results elsewhere to go in their favour, which is asking a lot.

Venezia: Kiyine is suspended for the hosts while Modolo, Romero and Vacca could miss out through injury.

Cagliari: the visitors have no fresh injury concerns or suspended players this weekend. 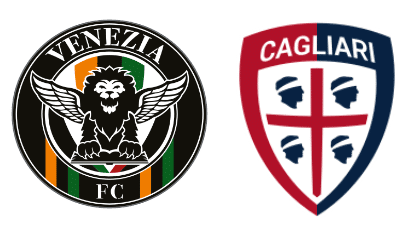