This encounter is one of very few dead rubbers in League One as the season nears it's conclusion. Both sides will want to win though. Who will? Find out with our Burton vs Plymouth match preview with free tips, predictions and odds mentioned along the way.

Burton vs Plymouth: Tips, just for you

These sides are separated by just a single point in the table but their form is not quite as similar. A look over the last 10 matches would have Burton sat third and Plymouth sat third bottom. A big part of that is because the Brewers have won their last three matches; Plymouth have taken just three points from nine having lost their last two. Burton also have head to head meetings on their side too; Plymouth haven't beaten Burton at the Pirelli Stadium in five attempts.

A minimum of three goals

Burton and Plymouth might be locked close to one another in the league and not too far clear of the relegation scrap but there is a great chance they'll serve up a goal filled contest on Saturday. Burton's last four home matches have all finished in excess of 2.5 goals with four of Plymouth's last five away trips ending the same way. A look at their performance across the season backs up the theory of seeing goals too; they average 2.8 and 2.9 goals per game respectively.

Both sets of fans to cheer a goal

The previous prediction suggests goals will be scored when these two lock horns. Both teams will be in on the act too; at least they will if the statistics are anything to go by. For four home fixtures running Burton have seen goals fly in for both teams. Plymouth's away matches has seen that occur in three of their last five. Four of the past five head to heads have seen both teams bag goals as well. Further evidence it's highly plausible to see it happen again.

Burton vs Plymouth: A few nuggets to keep you informed

A nothing game with eyes on next year

There are very few games taking place at the moment with nothing riding on them. This is one of them though. What does that mean? Well, sometimes it means the game is a drab affair. Other times it means you can get a match with no fear and that can make for a brilliant watch. 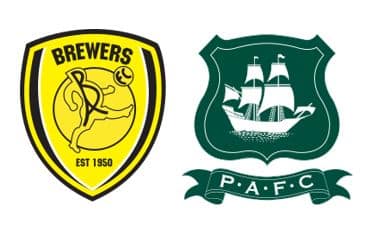