Lincoln are everything that Burton will aspire to be next season with the fact they're punching above their weight in a division stacked with so-called bigger clubs. Who will win when they meet on Tuesday though? Find out with our Burton vs Lincoln match preview with free tips, predictions and odds mentioned along the way.

Burton vs Lincoln: Our picks for you

Burton might be unbeaten in five matches but we kick our tips off backing Lincoln to win. It's far from a guaranteed winner but there a stats to support the prediction. What is the reasoning? Burton's most impressive results have come away from home with their home results actually seeing them sit 17th in a 10 match form table; their away form over the same length of time puts them top! Lincoln are similar in that their away form is also much stronger than their home. Thankfully for them, they're the away team this time out.

If the match result prediction is a narrow call then the BTTS bet is much less so. Burton have scored in eight of their last 10 home matches with at least one goal in each of their past five. Lincoln actually go one better than that with respect to their away from; they've netted in nine of their previous 10 with their last blank coming back in early February against league leaders Hull. Given the sides have only managed a combined five clean sheets from those 20 matches and it starts to scream goals.

Despite both sides regularly finding the net neither are heavily reliant on one standout goal getter; the top scorer across both teams only has 13. That's Kane Hemmings and he hasn't scored in eight matches. Scully, however, is a forward in form. He's scored three goals in his last four matches including having netted two in his past two games away from the LNER Stadium. His recent run means the Irish youngster is one stroke away from hitting double figures for the campaign.

Odds and more for Burton vs Lincoln

Hard to call but a good watch almost guaranteed

Lincoln are looking better and better value for a playoff spot with each passing game week whilst Burton look like a side that could well challenge next season after their mid-season change of gaffer. It means this match will be closer than the table suggests and could have big ramifications on how Lincoln end the campaign. 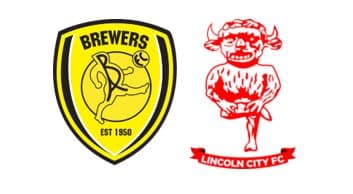