Burnley's form has started to improve following a poor start to the new Premier League season but they face a tricky home game against mid-table Crystal Palace this weekend. The visitors arrive in the midst of an unbeaten run of their own and should prove a tough nut to crack at Turf Moor.

Here are our predictions for Burnley vs Crystal Palace.

We're backing both teams to find the back of the net on Saturday as each arrives in good form. Both teams have scored in three of Burnley's last four outings while four of Crystal Palace's last six fixtures have produced goals at both ends of the pitch, so you can see why we're not expecting either side to keep a clean sheet on Saturday.

Maxwel Cornet was deployed largely as a win-back for Lyon but Sean Dyche saw the Ivory Coast international's attacking ability and has moved him further up the pitch. So far, in his debut season in the Premier League, Cornet has netted 4-goals and top scores for Burnley this season. We're backing the 25-year-old to find the back of the net this weekend against a Crystal Palace side that don't keep a lot of clean sheets.

Conor Gallagher has been one of the stars of the early stages of the 2021/22 season and made his England debut last week. With 4-goals in the league so far, Gallagher joint-top scores for the Eagles this season and we're backing the on-loan Chelsea midfielder to score against Burnley this weekend.

All you need to know ahead of Burnley vs Crystal Palace

Burnley made the trip to table-toppers Chelsea last time out, where nobody expected them to come away with anything but a defeat. However, this Burnley side look full of confidence and despite going in at the break 1-0 down, Vydra equalised in the 79th-minute and Sean Dyche's men came away with a very well-earned point.

Crystal Palace had the home advantage against Wolves before the international break and despite the sides going in goalless at the interval, the Eagles made the most of their home support. Zaha opened the scoring just after the hour mark and on-loan Chelsea star, Gallagher, made sure of the points with his 4th-goal of the campaign with just 12-minutes left on the clock.

Burnley: Aaron Lennon and Dale Stephens are the main injury concerns for the home side this weekend.

Crystal Palace: Eberechi Eze and Nathan Ferguson look set to miss out once again this weekend for Burnley, but Will Hughes and Joachim Andersen could make their returns. 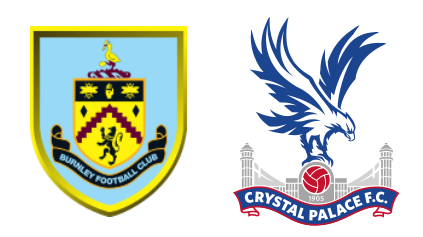