FW Predictions for Liverpool vs Brighton

Liverpool could really do with a win this weekend as they currently sit 9pts behind the league leaders but have played one game fewer. Roberto De Zerbi takes charge of his first Premier League game as Brighton's new head coach in what will be one of the club's hardest away games of the campaign.

Liverpool & Both Teams to Score

Even though Brighton have outplayed Liverpool so far this season, we're backing a home win with both teams to score on Saturday. Liverpool have won three of their last six meetings with the Seagulls, only losing once during that period, and both teams have scored in four of those six encounters. Both teams have also scored in four of Liverpool's last six fixtures in all competitions as we as in each of Brighton's last two league games, so you can see why we're not expecting either defence to keep a clean sheet this weekend.

At least three goals have been scored in three of the last six league meetings between these two clubs, and we're predicting another action-packed 90-minutes on Saturday. Liverpool have seen over 2.5 goals scored in five of their last six matches in league and cup while at least three goals have been produced in three of Brighton's last four outings, adding further weight to our second prediction for this Premier League clash.

Even a win won't take Liverpool above Brighton this weekend

Liverpool's last league game was at Goodison Park for the Merseyside derby. The game ended goalless in the end but it was one of the best goalless draws to ever grace the English game. Both teams played for the win and had excellent opportunities to score but on this day, the goalkeepers came out on top with Jordan Pickford picking up the man of the match award. Everton did put the ball into the back of the net but VAR saved the Reds as it was given offside even though there were indications that Milner had played Coady onside.

Brighton put in one of their best Premier League displays for what turned out to be Graham Potter's last game in charge of the club at home to Leicester. Despite going a goal down in the very first minute, Brighton ended up winning the game in style scoring five goals, including a brace by Mac Allister, on their way to a very impressive victory.

Brighton: Jakub Moder, Enock Mwepu, Adam Lallana and Jeremy Sarmiento could all miss the trip to Merseyside through injury or illness.

Q&A for Liverpool vs Brighton 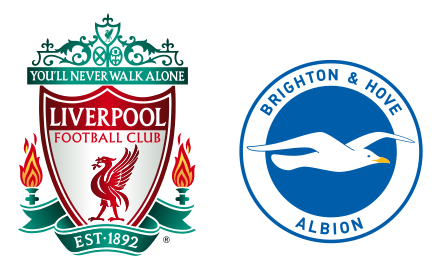