Brighton's promising start to the new Premier League season continued as they picked up a point away at rivals Crystal Palace last Monday. This weekend, an improving Arsenal side provide the opposition at the AmEx looking to make it five wins on the run in all competitions.

Here are our predictions for Brighton vs Arsenal

We're backing both teams to score in Saturday's evening kick-off as that has been the case in four of the duo's last six Premier League meetings. Brighton's last two league games have also ended with both teams getting on the scoreboard and Arsenal's last match, the North London derby, also saw both teams score, so you can see why we're expecting goals in this game for both sides.

At least three goals have been scored in four of Arsenal's last six matches in all competitions and while Brighton haven't been involved in many high-scoring games of late, the hosts have only failed to score in one of their last six fixtures. Two of the last four meetings between these two teams in the Premier League have produced 2-1 wins for Brighton and there have only been two clean sheets in the pair's last six encounters.

If you are going to pick any Brighton player to score this weekend then Maupay would be the obvious choice. The 25-year-old French striker has netted 22 Premier League goals since making the move from Brentford to Brighton, including 4-goals in the current campaign. It has often been said of Brighton that if they find a 15-20 goals-a-season striker then they will challenge for a top-half finish and Maupay could be that man. We're backing Maupay to score against the Gunners this weekend.

All the stats and latest markets ahead of Brighton vs Arsenal

Will the Gunners bring the Seagulls back down to earth on Saturday?

Brighton snatched a point at the death away at arch-rivals Crystal Palace last time out. A Zaha penalty had put the home side in front on the stroke of half-time but a dramatic goal deep into second-half stoppage time from that man Maupay made the scoreline 1-1 and gave Brighton's fans the last laugh. If this game had come earlier in the season then Brighton may have been much more confident about their chances of securing all 3pts but Arsenal have been improving of late and do present a tough challenge for the home side.

Arsenal's form was already starting to pick up before they beat their local-rivals Spurs 3-1 at the Emirates last weekend and now Arteta's men have plenty of confidence and belief in the way they are playing. Brighton have the home advantage but last season the Gunners won home and away against the Seagulls and will be looking to repeat that feat during the 2021/22 campaign. Arsenal are still lacking a striker in the midst of a purple patch but have been scoring goals from different areas of the team and will cause Brighton plenty of problems on Saturday.

Brighton: Webster, Bissouma, Mwepu, Alzate and former Gunner Welbeck are all injury concerns for the hosts.

Arsenal: Granit Xhaka might have returned from his suspension but now the Swiss international has a knee injury that is set to keep him from making the trip to the south coast.

Your Questions – Brighton vs Arsenal 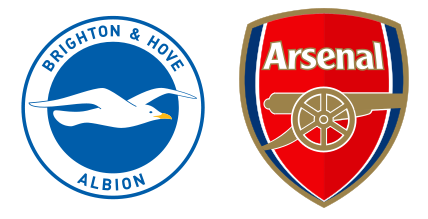