Stade Brestois 29 held Olympique Lyon to a 1-1 draw in their Ligue 1 opening round fixture. They are in the comforts of Stade Francis-Le Ble this Sunday as they take on the challenge of Stade Rennes, who were also held to a stalemate in their 2021/22 curtain-raiser.

Both Brest and Rennes started the 2021/22 Ligue 1 campaigns with draws against their respective rivals. Despite showing fighting resolve against Olympique Lyon, the Pirates will be wary of Rennes, against who they have not won since 2011. With Brest claiming the worst record in 2021 in the French top-flight football, we are backing Rennes to take home the three points on offer.

The last four league outings for Brest have finished with an Under 2.5 goals scoreline on three occasions. For Rennes, a similar statistic reads against their names, leading to our confidence in this fixture providing less than three goals for the spectators.

Rennes have failed to trouble the scorers just once in their last five Ligue 1 outings, whilst also keeping a clean sheet in the process. For Brest, the board reads two shutouts in the same period. Both sides have failed to score in two of the last four meetings between Brest and Rennes, and we expect a similar result at the culmination of 90-minutes of action at the Stade Francis-Le Blé.

Brest vs Rennes: Check out the best odds and the latest stats

Match Preview of Brest vs Rennes

It has been a decade since the last time Brest defeated Rennes in the French top-flight football. Following their 1-1 draw with Olympique Lyon last weekend, the Pirates will fancy their chances against the Red and Blacks. While the club's history is not on their side, their manager Der Zakarian has also struggled against Rennes, winning just two of his tactical battles against Rennes.

Statistics and lore favour the visitors in this fixture, something that will not be lost on Bruno Génésio. He has not lost a battle against Der Zakarian and will want to one-up his rival at the start of the campaign. Under his guidance, the Red and Blacks finished sixth in the league, 11 places above Brest on the points table.

Questions About Brest vs Rennes 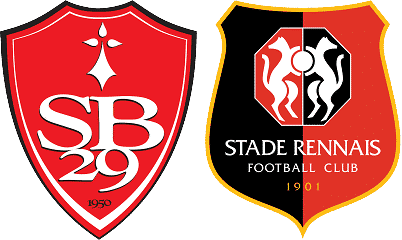 Where is the game being played? Stade Francis-Le Blé (Brest).

Which team is the favourite to win? Rennes.