Monaco and Brest lock horns on Saturday 14th May 2022 at Stade Louis II, Fontvieille in Monaco. The hosts have a chance to finish second but that will depend on how they fare in the remaining two games. Read this game preview for more, including free predictions for the Ligue 1 game.

Monaco vs Brest Free Tips and Predictions by Football Whispers

While Monaco is third on Ligue 1 table, three points behind second-placed Marseille, Brest is currently ranked 11th. Brest won the reverse game and so, the question is will they bag all the points in this second meeting of the season against Monaco? Here are the best free predictions for this game:

We expect the hosts to cruise to a win in the first half of this game. Monaco won all their last eight Ligue 1 matches and playing their second-last game at home and looking to finish second should be motivating enough for them. Brest has little to play for and have seemed reluctant in recent games.

While Monaco needs to finish in second place, we don’t think this will be an entertaining match. A low tempo encounter is all we expect. Most importantly, of all the six meetings that have taken places between Monaco and Brest, only one game had more than two goals at full-time.

Here are the best odds from handpicked top rated bookmakers in the UK.

At second place on Ligue 1, Monaco is just three points shy of securing the second place. All the teams have played 36 matches, which mean there are only two games to go. Monaco’s next matches include this weekend’s fixture against Brest and last game of the season will be against Lens.

On the flip-side, Brest plays against Monaco and finally Bordeaux. The visitors defeated Monaco 2-nil in the reverse game but after some shaky performances in recent outings. Brest won three games in a row before losing the last time out against Strasbourg. The visitors scored six goals in their last five matches and conceded four goals.

On the contrary, Monaco won all their last five games, scoring 12 goals and leaking four within that run. Moreover, the hosts in this fixture won all their last eight Ligue 1 matches, a performance that they look to maintain by winning the remaining two games this season. We think Brest have a difficult assignment in this trip to Monaco and given the current standing of the visitors, there is little to lose or gain regardless of the outcome of this game. 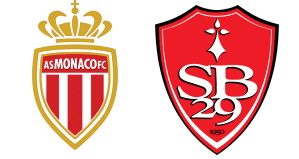 Which team has a better record in the last five meetings?

When is this Monaco vs Brest taking place?