Lyon returned to winning ways after disappointingly exiting the Europa League. Read this review to ascertain the teams' strengths going to match-day 33.

Brest recorded a single win in five Ligue 1 attempts coming to the mid-week encounter. The following are our top predictions:

MoussaDembele has been involved in eight match-opening goals this season. We predict that the French forward will get on the score sheet first when Lyon lines up against Brest on Wednesday evening. Dembele was also involved in the first goal in Lyon’s last Ligue 1 match.

Three goals in the first half enabled Lyon to get a much-needed confidence boost after a 3-0 humiliation in the hands of West Harm. The last meeting between these teams ended all square with a 1-1 scoreline. However, the visitors have not shown their early-season strength as they avoided defeat in two out of five attempts.

This will be the eleventh meeting between these Ligue 1 outfits since 2011. Lyon has won two matches against Brest while the latter is still searching for its first win of the encounter.

Brest avoided defeat in three of its recent home encounters in the league. The hosts failed to score on a single occasion during the same period, implying that scoring goals is not Brest's challenge. The main challenge has been conceding too many goals. Brest conceded seven goals in its recent home Ligue 1 matches. Michel Der Zakarian has an uphill task of continuing Brest’s form against Lyon – Les Gones failed to beat his side in eight of their recent encounters. Two players will be out for the Wednesday encounter – Douaron and Herelle.

Peter Bosz’s work cut out for the remaining part of the season – drive Lyon to European competition next season. This target faces another serious hurdle following Wednesday's opposition – Lyon will be looking for the third win against Brest in eleven encounters. Peter Bosz resorted to his 4-3-3 formation which gives an attacking display to ease six past his latest opponents. That win took Lyon to the eighth spot in the league table – three places outside the European positions.Lyon has a long list of injured players. Denayer, Dubois,Kadewere, Ndombèlé, Anthony Lopes, Caqueret,Diomandé, andCherkiwill all miss the Wednesday encounter.

FAQs about Brest vs Lyon 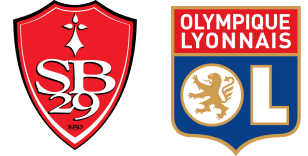 What is the venue for the coming Brest vs Lyon?

What is the kick-off for the next Brest vs Lyon?

The coming encounter between Brest and Lyon will start at 2200hours +GMT.

Who will referee the coming Brest vs Lyon?

Jeremy Stinat is the French referee who will be in charge of the coming encounter between Brest and Lyon.