Man Utd play host to Brentford in the Premier League on Monday night with the hosts hoping to secure European football for next season, while the Bees have hopes of claiming a top-half finish.

We're expecting an entertaining 90-minutes on Monday night as both teams still have something to play for and the visitors arrive in good form. Both teams have scored in five of the last seven meetings between Man Utd and Brentford, including the Red Devil's 3-1 win in January's reverse league fixture. Four of Manchester United's last six league games have ended with both teams getting on the scoreboard, while three of Brentford's last five fixtures have also produced goals at both ends of the pitch.

This is a fixture that has often produced goals throughout the years and we're backing at least three goals to be scored at Old Trafford on Monday night. Over 2.5 goals have been scored in six of the last seven meetings between these two clubs, while three of Man Utd's last four outings and three of Brentford's last five games have also witnessed over 2.5 goals scored.

Key Statistics and Match Data for Man Utd vs Brentford

Man Utd were at home to Chelsea in midweek where a tight and tense first-half ended goalless. On the hour mark, Alonso fired Chelsea in front after good work from Havertz who claimed an assist but United responded quickly and were back on level terms 2-minutes later thanks to top scorer, Ronaldo. A point did do much for either team but was probably a fair result based on the balance of play over the 90-minutes.

Brentford continued their good run of form at home to high-flying Tottenham last time out. The game itself won't live long in the memory as it ended goalless but a point was certainly a better result for the home side as Spurs are trying to finish in the final Champions League spot this season and now sit 2pts behind local rivals Arsenal.

FAQs About Man Utd vs Brentford 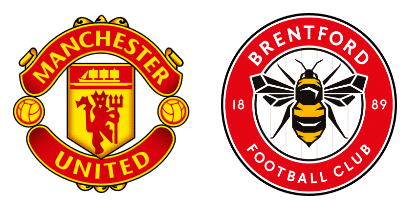