Forest won't lose – but the Cherries might grab a crucial draw

Second versus third, there's a lot at stake here; one of these teams will automatically get promoted to the Premier League whilst the other will have to go through the playoffs. While Bournemouth have the advantage of playing at home, they have not been very impressive recently; Scott Parker's men have just two wins in their last seven games, although they lost just one of those games. On the other hand, Nottingham Forest have been unstoppable lately; they've won their last four, and nine of their last 10 league games. Forest are coming off a comfortable 5:1 win against a Swansea side that had no losses in nine prior games. Considering both teams' recent form, we don't think Nottingham Forest will lose today.

Expect goals from both teams

These are two of the top three scoring teams in the Championship; both teams have scored 72 goals each, only league leaders Fulham have scored more goals this season. It's worth noting that Bournemouth scored at least three goals in three of their last four games; they bagged 10 goals in their last four games alone. Like Bournemouth, Nottingham Forest have not had much trouble finding the net; they scored five goals in their last game, and they found the back of the net in 11 of their last 12 league games. Considering the way these teams score, we should expect goals at both ends.

Bournemouth vs Nottingham Forest: Let's look at the predicted lineups

A clash between second and third when the final automatic promotion spot is still up for grabs is always likely to be a good and fiery game. We should expect no different here with Nottingham Forest the side in better form and in a must win situation.

After back-to-back draws, Bournemouth got back to winning ways with a comfortable 3:0 win at Blackburn; they managed to maintain their three point lead over Nottingham Forest. Additionally, Bournemouth will secure automatic promotion to the Premier League if they win this match; and that's exactly what they'll hope to do.

A quickfire FAQ on Bournemouth vs Nottingham Forest 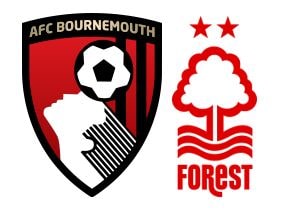