Borussia Dortmund come into the game against Sevilla with the team looking to seal a place in the knockout stages at this early stage. This is a preview of the game which takes place on October 11, 2022.

Borussia Dortmund were involved in a very entertaining 2-2 draw at Bayern Munich during the weekend just a few days after the 4-1 victory over Sevilla in Spain. Sevilla did bounce back from the heavy loss against Borussia Dortmund in the reverse leg with a 1-1 stalemate with Athletic Bilbao.

Borussia Dortmund were unable to come up with a comfortable victory in the reverse fixture. The German outfit may be set for a similar outcome especially with home support behind them. Sevilla are dangerously close to being knocked out after having picked up only one point from the first three matches. Dortmund have the attacking potential to overcome such an opponent with ease.

Dortmund manager Edin Terzic comes into the game with a whole host of players either unavailable due to injuries and suspension. This once again prevents the opportunities for making changes to the lineup. However, the results like the draw with Bayern Munich will give them a lot of confidence.

Sevilla step into the match showing a firm test of character but the club’s form this season has been a big worry. The Spanish outfit should be a much stronger outfit than they showed in the reverse leg against Dortmund.

Borussia Dortmund: Borussia Dortmund have a string of players on the treatment table. Mahmoud Dahoud       , Mateu Morey, Jamie Bynoe-Gittens, and Marco Reus are the players who are doubtful for the game. Sebastian Haller continues to remain unavailable because of a cancer. Mats Hummels, Thomas Meunier, and Giovanni Reyna are other players who are missing for the team.

Sevilla: Sevilla come without Jesús Corona, Karim Rekik, and Fernando missing due to injuries. Oliver Torres is ineligible to be part of the squad.

Questions about Borussia Dortmund vs Sevilla 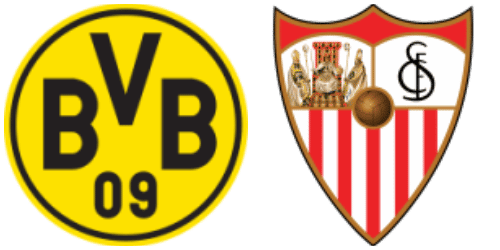 Where is the match scheduled? Signal-Iduna-Park

Which team is the favourite to win? Borussia Dortmund