A devastating loss in midweek against one of their relegation rivals has left Venezia's Serie A status hanging in the balance and nothing but a win will do at home to Bologna on Sunday. The visitors have little left to play for but pride this season but that hasn't stopped them from being very hard to beat of late.

Bologna have only lost one of their last seven encounters with Venezia but they do owe their hosts after slipping to a 1-0 defeat in November's reverse league fixture. Venezia head into this game in the midst of a terrible run of form, losing each of their last 10 league games, while Bologna haven't lost any of their last six outings in Serie A, picking up two wins and four draws.

This game certainly has the potential to be low-scoring as Venezia struggle to score goals and Bologna have a good defensive record of late. Under 2.5 goals have been scored in each of the last five league meetings between these two clubs. Venezia have failed to score in two of their last six matches and haven't scored more than one goal in any of their last six fixtures. Four of Bologna's last six matches have also witnessed fewer than three goals scored with the visitors keeping clean sheets in three of those games.

All you need to know ahead of Venezia vs Bologna

Venezia really had to win at Salernitana in midweek and certainly could not afford to lose. A 7th-minute penalty from Bonazzoli put the home side in front but Venezia got back onto level terms in the 58th-minute thanks to a goal from Henry. However, there was one more goal in this game and it went the way of the in-form hosts as Verdi clinched all 3pts for Salernitana in the 67th-minute. There was still time for Venezia to get midfielder Ampadu sent-off for a second bookable offence in the 89th-minute, adding insult to injury for Venezia.

Bologna put in a strong defensive display to secure a point away at Roma in their last game. The match itself won't live long in the memory after ending goalless but Bologna will be pleased with the result more than Roma who are now on level points with local rivals Lazio in the race to finish 5th.

Venezia: Vacca and Romero will both face late fitness tests for the hosts, while Ampadu is suspended.

Bologna: Mitchell Dijks is the main injury concern for the visitors. 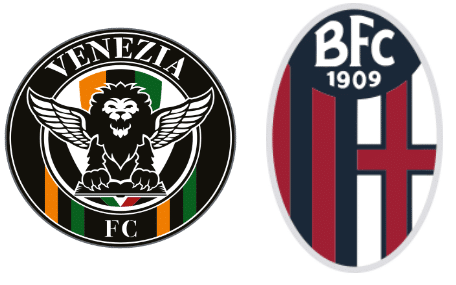