Blackpool's incredible unbeaten run came to an end in the week but they have the opportunity to get back at it against Shrewsbury? Will they bounce right back? Find out with our Blackpool vs Shrewsbury match preview with free tips, predictions and odds mentioned along the way.

Blackpool vs Shrewsbury: The top tips

Blackpool to bounce back

Blackpool losing to Rochdale was one of the League One shocks of the week given they'd been on a 16 game unbeaten run until that point. We're backing them to bounce back immediately though. In part, that's because their confidence will still be high after such a decent streak whilst they still have work to do to nail down a playoff spot; that's a big motivation. The other thing to consider is their opponent. Shrewsbury, albeit they're not 100% safe, look almost guaranteed to stay up and their form is shoddy of late. They've not won in four and have lost their last three.

If you wanted to combine our first prediction with this tip then you could but we're going for the safer option of a straight ‘BTTS – no'. Blackpool have kept back to back clean sheets in their last two home matches with just four goals conceded in their previous five matches. Shrewsbury aren't really an outfit that carry huge attacking threat either; they've only scored four in their past five away matches failing to score in two of the last three. Finally, you can throw in their head to head record; of the last 10 meetings between the pair only two of them have seen goals for both sides.

A second half blitz?

Do we believe Blackpool will win this match? Yes, our tips have made that quite clear. The Tangerines haven't scored a first half goal in three games though with just one opening 45 strike in the last four matches. Shrewsbury will aim to be tight given their recent form, which won't help Blackpool but gaps will appear at some point. We think Blackpool will outscore Shrewsbury in the second half regardless of what the score line is at the interval.

Rochdale loss to prove nothing but a blip for Blackpool

Blackpool might have lost to Rochdale last time out but they remain in a tremendously strong position to make the playoffs. Shrewsbury don't really have too much to play for with a game in hand and a seven point gap to the relegation places – a win would guarantee their safety though.

Blackpool vs Shrewsbury: The key questions 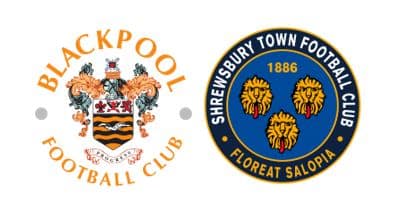