Blackpool vs Reading: Check out our betting tips

Reading have seemingly sparked into life over the last week and now look good value to stay up. Can they find another positive result here? Find out with our Blackpool vs Reading match preview with free tips, predictions and odds mentioned along the way.

Although Blackpool have had a better season than Reading overall, they have not been playing well recently; Blackpool are winless in their last four games, with two draws and two losses. On the other hand, a coaching change has been good for Reading; they've won their last two games, and they have no losses in their last three games. Additionally, Blackpool have not done too well against Reading in recent encounters; they've won just one of their last six clashes with Reading, with two draws and three losses. Considering both teams' form, we believe that Reading will take at least one point from this match.

Despite Blackpool's poor recent form, they've been very consistent when it comes to finding the net; Blackpool have scored in all of their last 12 games in all competitions. Conversely, Blackpool have not had much trouble conceding goals; as they've done so in all of their last six games. In like manner, Reading have scored eight goals in their last five games; they've kept just one clean sheet in their last 23 games. Both teams scored in four of Reading's last five games, and in all of Blackpool's last six games; with this in mind, we should expect goals at both ends.

Here are the key stats & form guide for Blackpool vs Reading

Blackpool's form might be poor but fans need to remember where they've come from; the fact they aren't in a relegation battle is massive for them. Reading meanwhile are in that relegation cluster but recent form suggests they might have enough about them to stay up after all.

Blackpool are coming off a loss at Queens Park Rangers; even though they played against a short-handed team for over 40 minutes, Blackpool couldn't capitalize on their one-man advantage. Neil Critchley's men are without a win in their last four games; they'll hope to put an end to that unwanted streak today.

Reading parted ways with Veljko Paunovic after a string of disappointing results; they brought in former Manchester United legend Paul Ince as a temporary replacement. Reading have now won back-to-back games, and they have no losses in their last three games. Paul Ince will fancy his side's chances against a team he managed eight years ago. 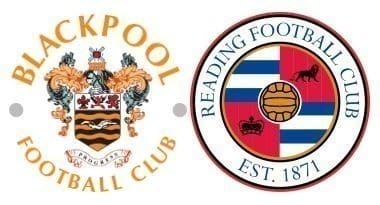