With Liverpool claiming qualification to the knockout rounds, the remaining three teams are battling for continuity in the UEFA Champions League. It is a must-win affair for AC Milan, who are travelling to Wanda Metropolitano in the bottom place. On the other hand, the hosts Atletico Madrid look back to claim the second slot from FC Porto and end the Rosonneri's chances in the process.

Here are our predictions for Atletico Madrid vs Milan.

AC Milan lost out to a spirited Fiorentina over the weekend and we believe a similar fate awaits them on their trip to Wanda Metropolitano. Atletico Madrid are a tough team to beat as La Liga newcomers Osasuna found out this past Saturday. The last three meetings between the two sides have concluded in favour of Los Indios and it looks unlikely that a winless in three games Milan side will break that curse.

With 29 goals, AC Milan are the second-highest scorers in the in Serie A. They have failed to bring that success to the Champions League, where they have only scored four goals in as many games. Atletico Madrid does not go hunting if they don't have to and will rely on soaking up the pressure as the onus is on the Rosonneri in this must-win encounter. Expect Atletico to hit them on the counter and finish off this low scoring game.

The last time these teams met at the San Siro, scorers were troubled at either end of the pitch. We do not believe it will be the case this time around. While Milan has scored freely in the Serie A, the same cannot be said about Atletico's exploits in La Liga. The club from the Spanish capital pride themselves on their defence and in Jan Oblak have the best goalkeeper in the world.

Atletico Madrid vs Milan: Check out the best odds and the latest stats

Liverpool and Porto have the coveted top-two positions in UEFA Champions League Group B. While the Reds have booked their place in the knockout rounds with a flawless return, Porto's chances hang in a balance. Atletico Madrid are trailing their Iberian neighbours by a single point and can leapfrog them with a win over AC Milan, and the Dragons fail against Liverpool.

While Porto and Madrid fight it amongst themselves, AC Milan cannot be ruled out of knockout rounds reckoning. The Rossoneri can claim third place with a win over their Spanish rivals. This will set up an interesting final round of action where they will have to defeat Liverpool to ensure continuation in the Champions League or a place in the Europa League playoffs.

Questions About Atletico Madrid vs Milan 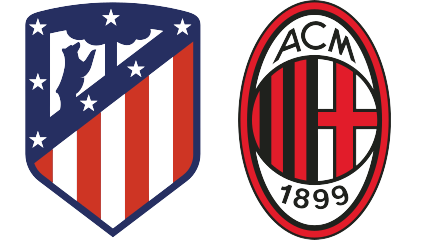 Who won the last h2h? 1-2 in favour of Atletico Madrid.

Where is the game being televised? beIN Sport, BT Sport ESPN, DAZN Deutsch and TV3 MAX.