The last match in La Liga scheduled for Sunday is the Basque derby, the Athletic Bilbao vs Real Sociedad duel. So, check our preview of this game to learn more about it and to get some free betting tips.

If you are struggling to decide what is the right bet for Athletic Bilbao vs Real Sociedad, check our favourite betting tips for this game:

Athletic Bilbao and Real Sociedad to Draw at Half Time

This is one of the biggest derbies in Spain and it's always tough to predict what can happen. That being said, Athletic Bilbao is in better for, but they didn't beat Real Sociedad in their last five meetings.

So, we would avoid betting on the final outcome and stick to betting on the half time. Three of the last five h2h duels between these teams were tied at half time and we can see that happening again in their next match.

The last four head-to-head duels between Athletic Bilbao and Real Sociedad have gone under 2.5 total goals and we expect the same to happen on Sunday.

If you want to bet on the top La Liga odds, you've come to the right place. Here are top odds and stats for Athletic Bilbao vs Real Sociedad:

The Basque derby is one of the biggest ones in Spain, so let's take a closer look at both teams ahead of it:

The Basque team has been in great form in the past month or so, both in the league and in the cup. The team has reached the semi-finals of Copa del Rey, although they failed to beat Valencia at home in the first leg that ended in a 1-1 draw. Meanwhile, Athletic Bilbao has three wins, one draw, and two losses in the last six games in La Liga and they are currently eighth in the standings.

Athletic Bilbao remains without Ander Capa and Nico Williams, who are injured, while Oier Zarraga is out of the upcoming game through suspension. On the bright side, Inigo Martinez will be back in the lineup after serving a suspension of his own.

It's been a while since Real Sociedad sat at the top of the standings, but the team finally seems to be over their long-lasting crisis. After all, Real Sociedad is undefeated in their last five La Liga matches. Furthermore, the team had a tough mid-week duel against Leipzig in Europa League and they managed to secure a draw before the second leg they'll play at home.

When it comes to team news, Real Sociedad has a few issues with injured players since Ander Barrenetxea, Nacho Monreal, and Adnan Januzaj are all out, while Carlos Fernandez is doubtful. 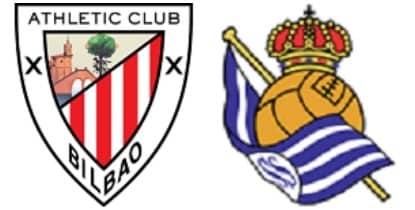