One of the more exciting games of this Copa del Rey round is the Athletic Bilbao vs Barcelona duel. With that in mind, we have prepared a detailed preview of the game for you.

Our best free betting predictions for Athletic Bilbao vs Barcelona

If you are not sure what is the best bet for Athletic Bilbao vs Barcelona, check some of our favourite tips for this match:

While the two teams are not that far away in terms of form and even in La Liga standings, Barcelona is clearly the better team, at least on paper. They are also the favourites in this game.

So, with Bilbao playing two games over the weekend in Super Cup and Blaugrana only one, we expect the guests to be fresher for this match. In any case, our prediction is for Barcelona to beat Athletic Bilbao, just like they did in three of their last five h2h duels.

Four of the previous five head-to-head meetings between Athletic Bilbao and Barcelona have gone over 2.5 total goals, with the teams averging 3.80 goals per game in those five matches.

So, we expect to see some goals in this game as well. After all, Barcelona averaged 2.70 goals per game this season in La Liga. That being said, Athletic Bilbao averaged 1.76 goals per game until now in the league.

Top odds and stats for Athletic Bilbao vs Barcelona

The odds for Athletic Bilbao vs Barcelona can vary from one betting site to another, so we have selected odds from the best UK bookies right here:

This is perhaps the most exciting duel in Top 16 stage of Copa del Rey. So, let's check both teams out in more detail:

After winning the Spanish Super Cup last season, Athletic Bilbao was close to defending the title over the weekend. The Basque team eliminated Atletico Madrid in the semi-finals, but Real Madrid was too much for them in the final. Meanwhile, Athletic Bilbao is ninth in La Liga and they have been pretty inconsistent the entire season. Still, the team is certainly optimistic ahead of their Copa del Rey duel with Barcelona.

Once again, Athletic Bilbao will be without Unai Vencedor, Unai Nunes, and Asier Villalibre, who are all on the team's injury list right now. Other than that, the team should be able to count on all players.

Barcelona enters this game after losing to Real Madrid in the semi-finals of Spanish Super Cup, although they only lost after extra time, so it could be said that it wasn't a bad performance for the team. In the league, Barcelona is sixth at the moment and they have two wins, three draws, and one loss in the last six games.

When it comes to injuries and other personnel issues, Barcelona is finally getting back some of their players after struggling for a long time. However, Samuel Umtiti, Eric Garcia, and Sergi Roberto are still out, while Martin Braithwaite is questionable.

The most common questions for Athletic Bilbao vs Barcelona 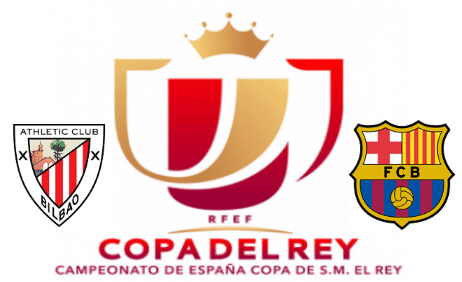