The Atalanta vs Sassuolo on Tuesday could be a very interesting one in this mid-week round of Serie A. This is the reason why we have prepared a preview of this match for you, along with free betting predictions.

Our top betting tips for Atalanta vs Sassuolo

If you are not sure what is the best bet for the Atalanta vs Sassuolo duel, check some of our favourite betting tips for this game:

The team from Bergamo established themselves as one of the best teams in Italy and they started the new season well with two wins, one draw, and one loss – three points ahead of their upcoming opponent Sassuolo. In any case, Atalanta beat Sassuolo in four of their last five meetings and all of those games Atalanta won by at least a two-goal difference, so our first prediction for this match is for Atalanta to win.

This is one of those matches where we can expect a lot of goals and the only question is how much. If you want to bet on the safer option, bet on over 2.5 total goals. However, we chose to bet on over 3.5 total goals since the odds are better and because we've seen at least four goals in four of the previous five h2h duels between Atalanta and Sassuolo.

Top odds, stats, and more for Atalanta vs Sassuolo

You can check out the best Serie A odds on our website, including the top odds and stats for Atalanta vs Sassuolo:

Atalanta vs Sassuolo preview: An easy job for Atalanta?

The small team from Bergamo become a force to be reckoned with in the Italian Serie A in the last few season and they've became a standard part of the Champions League caravan now. The team started the new season with two wins, one draw, and one loss, which is not bad, but it could've been better. Demiral, Hateboer, and Muriel are currently injured and they will probably sit out the next game for Atalanta.

With one win, one draw, and two losses in the first four rounds, Sassuolo is currently sitting in the 12th spot in the standings, which is about the place where they should end up at the end of the season in Serie A since they've been a mid-table team for a while now. Luckily for them, Sassuolo has no injured or suspended players at the moment. 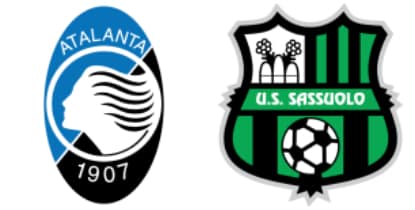